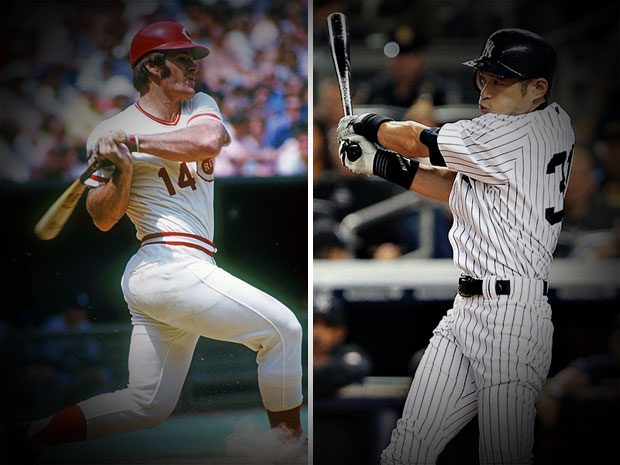 Pete Rose had first ballot Hall of Fame numbers even if he never rounded first base. The all-time MLB hits leader delivered 3,215 singles in his career, which up until, Craig Biggio, was wrongfully kept out of the HOF, meant automatic entrance. But Rose’s 90 foot base knocks is a good example of how prolific his hitting prowess really was. He had 1,041 additional hits where he kept running.

It’s a far cry for anyone to really challenge taking Rose out in the grand scheme of things. Derek Jeter has the most realistic chance and he would still need to repeat his 2012 numbers five more times from the ages of 39-43 and then deliver 152 additional hits. It’s safe to say Jeter, recovering from a broken ankle this past October, is most likely to finish second all time, fitting given the number he wears on his back.

That’s why debating Rose’s single’s record is the most intriguing. “Charlie Hustle” only slugged 160 HR and more or less made a living on the least valuable of all hits. Is there anybody out there who can challenge Rose?

But it would take three different continents of comparison

Ichiro Suzuki has the best bat control anyone who started watching baseball the past 20 years has ever seen. He already holds the all-time single season record for hits and singles and established himself a perennial All-Star from the moment he crossed over from Japan at the age of 27.

Let’s address the giant elephant in the room before we begin. Many feel it’s unfair to include Ichiro’s Japanese numbers because it’s been long established Japan is inferior competition. While obviously true, I don’t think it applies to this situation.

Ichiro actually has superior numbers in the US. While the first nine years of his career may have seen inferior pitching, Ichiro has faced plenty of disadvantages along the way. For one, he played nearly his entire career to date in the US in Safeco Field, a notorious pitcher’s park. As a result of being so pitcher friendly and the Mariners struggling for so long, Ichiro often had no protection whatsoever in the lineup, something Rose couldn’t really complain about given he played on some of the best teams of all time.

Finally, Suzuki only played 130 game seasons in Japan, a full 32 games shorter than Rose had the opportunity for every year, so suffice it to say at worst the disadvantages equal out to the advantages of the competition Ichiro may have faced in Japan.

Even if you want to argue Ichiro really was at a tremendous advantage, when all is said and done, the Japanese icon has a .322 career average and has played in 22 seasons standing just 185 singles short in over 2,800 at bats less than Rose.

So now let’s look at the rest of the story.

So what are his chances?

Suzuki has declined each of the past four years and will turn 40 years old on April 2nd. His BA has continued to drop and he has posted singles totals of: 179, 175, 154 and 135 respectfully. No longer in Seattle and likely back at the top of the lineup (he was third in Seattle for a period of time due to necessity and Jeter will likely bat second with the lefty Cano penciled in third), Ichiro will likely be closer to his Yankee numbers (54 singles in 227 AB) than his Seattle numbers from 2012 (105 hits in 402 AB), which is not a big difference to begin with due to New York’s smaller dimensions and Ichiro’s higher ability for extra base hits.

Even so, taking Ichiro’s worst combined season (2012) and factoring in more extra base hits but more hits overall for change of ball park and sticking with 135 hits, Ichiro would still break Pete Rose’s single’s record in professional baseball by 85 singles at the end of his contract with the Yankees in 2014.

The only factors which can possibly work against the bat wizard are age and opportunity. However, we know Ichiro is the starting right fielder for New York in 2013 and we know if he produces, he’s likely going to find a spot in 2014, particularly with Curtis Granderson‘s contract up after this season. New York signed him to a two year deal for a reason and it wasn’t to make him a role player in the second half of it.

That means health is literally the only thing which can derail this outcome. Suzuki has a career of staying healthy, known for a legendary work ethic and 6% body fat. Doctors have said his body is that of a man in his mid 20’s which is to say, Ichiro is physically still in his prime at 40. Last season, Suzuki played all 162 games and has never played less than 146 in a season in his entire American career.

One day, Suzuki will retire. His speed will dwindle, injuries will start to form and he will lose enough bat speed where he doesn’t make enough contact to justify light-hitting. However, in a new stadium, in a protected lineup, with the DH, with special physical health and already so close to the record – whether Ichiro retires after his contract or plays well into his 40’s like Rickey Henderson, Pete Rose is in trouble.

Ichiro Suzuki will have the most singles in professional baseball history in the summer of 2014 as a member of the New York Yankees.