Cincinnati Reds: Should Aroldis Chapman Transition From Reliever to Starter? 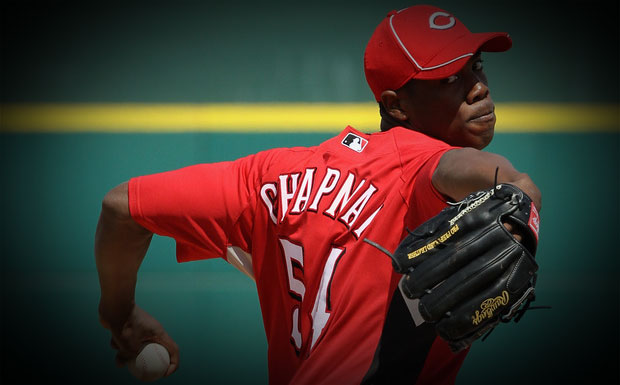 The Cincinnati Reds will be the newest team to attempt the always controversial switch of a star reliever into a starter. Cuban import, Aroldis Chapman, threw over 71 innings last year and dominated the National League in the ninth inning, posting a 38 saves, a 1.51 ERA, .141 BAA and over 15K/9 with just four blown saves. This season he will take his 100 mph fastball act to the rotation, with an expected inning limit of 150 innings at most.

For the Reds the move has obvious upside. Chapman has a fastball and slider on par with future Hall of Famer, Randy Johnson, and was a transitioned starter from his days in Cuba. If the 6’4 left-hander could harness the starter role, it’s possible he immediately becomes a top five lefty in all of baseball at 25 years old.

The move gives the Reds plenty of upside in its rotation. Chapman will join Bronson Arroyo, Johnny Cueto, Matt Latos and Homer Bailey, with Mike Leake also in the mix. Cincinnati is coming off a 97 win season and a year where its pitching staff surrendered the least amount of runs in baseball despite playing in a hitter’s park. The team upside for 2013 seems limited, particularly if Chapman is shut down for the postseason.

In addition, Chapman runs the risk of following the same path of many others who have suffered setbacks from the starter switch. Joba Chamberlain, Neftali Feliz and Daniel Bard represent three recent attempts at converting relievers to starters at the MLB level and having the plan backfire through injury or ineffectiveness.

Still, with Jonathan Broxton and Sean Marshall on the roster, the Reds feel it will have a strong bullpen regardless, and Chapman’s long-term potential in the rotation is at least worthy of a look from the NL Central favorites.