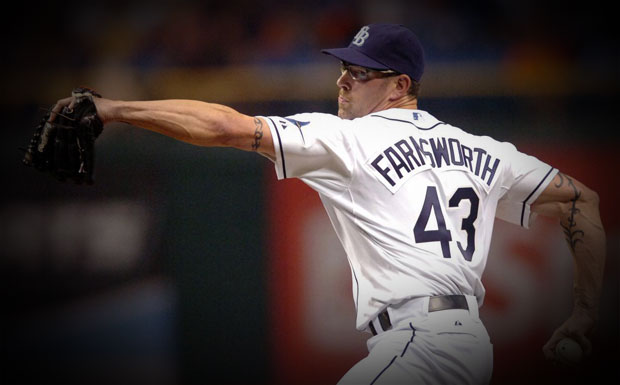 The Tampa Bay Rays have reached agreement with free-agent reliever Kyle Farnsworth a one-year deal that includes a base salary in the $1.25 million to $1.5 million range plus incentives. The deal is pending a physical and could be worth up to $3 million with bonuses according to ESPN’s Jerry Cransnick. Farnworth appeared in 34 games for Tampa Bay last season and was 1-6 with an ERA of 4.00 over 27 innings of work.

The 36 year-old was sidelined for the first two months of 2012, and lost his closing job to Fernando Rodney. Farnsworth had been in contact with multiple teams and had received multiple offers, including the Milwaukee Brewers, Seattle Mariners, Toronto Blue Jays, Detroit Tigers and New York Mets, although it was reported that he had giving considerable thought to rejoining the Rays. Farnsworth owns a home in the Orlando area and has spent the last two seasons in Tampa Bay.

Fanrsworth’s best season was 2011 when he pitched in In 57 2/3 innings and  had a 2.18 ERA and a 3.16 FIP, with 25 saves. Farnsworth will likely set up for Rodney in 2013. The Rays will need to make a corresponding move to add Farnsworth to the 40 man roster before finalizing the deal.