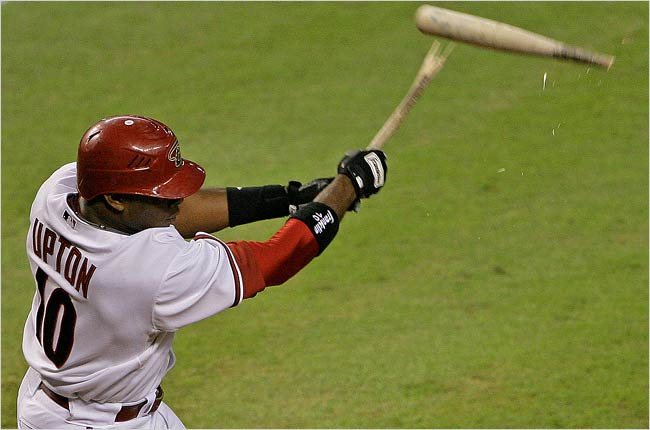 In Atlanta, Upton joins older brother B.J. Upton and 23-year-old Jason Heyward in what projects to be one of the best outfield trios in the majors.

With the aforementioned outfielders plus 23-year-old Freddie Freeman at first, 23-year-old Andrelton Simmons at shortstop, 28-year-old Brian McCann behind the plate and now the 28-year-old Johnson at third, 32-year-old second baseman Dan Uggla is the only member of the Braves projected 2013 starting lineup who is older than 30.

The Braves also kept soon-to-be 22-year-old right-hander Julio Teheran, who is one of the top starting pitching prospects in baseball.

Undoubtedly, Upton is the centerpiece of the deal for Atlanta. Though he has not consistently shown his potential, the right-handed slugger belted 31 home runs in 2011 before slipping to 17 last year. He is also a proficient defensive outfielder like his brother. The younger Upton gives the Braves yet another run-producing bat along with Heyward, Freeman, Uggla and the elder Upton.

That the Braves were able to also add Johnson at third base is a beneficial bonus. The right-handed hitting Johnson batted .281 with 15 home runs, 76 RBI and a .777 OPS between the Houston Astros and the Diamondbacks last season.

Atlanta’s lineup now features so much depth that Johnson could hit seventh while Simmons (who hit .289 in 166 at-bats for the Braves in 2012) could find himself in the No. 8 slot.

The trade also helps the Diamondbacks. Their outfield could feature Cody Ross, Jason Kubel and either Gerardo Parra, Adam Eaton or A.J. Pollock. The 29-year-old Prado – who batted .301 with 10 home runs, 70 RBI, 42 doubles and 17 stolen bases last season – can replace Johnson at third base.

Arizona has 21-year-old third base prospect Matt Davidson poised to take over at the hot corner. A supplemental first rounder out of high school in 2009, Davidson is a run producer who has improved his defense but did commit 28 errors in 127 games at third base at Double-A Mobile in 2012.

If The Diamondbacks believe that Davidson can effectively man third base, Prado can eventually move to left field. Kubel is a potential trade candidate.

Though Arizona did not land Teheran, it did get a promising starter in Randall Delgado. A 22-year-old right-hander from Panama, Delgado  has a power arm and made 17 starts for Atlanta in 2012, logging a 4.37 ERA and a 1.41 WHIP with 7.4 strikeouts and 4.1 walks per nine innings.

Delgado, Skaggs and Corbin will likely compete for the No. 5 spot in the rotation, and if an injury (or injuries) arise, the Diamondbacks are well-equipped with their depth.

By adding Ahmed, who was Atlanta’s second round pick in 2011 out of the University of Connecticut, the Diamondbacks continue to stockpile shortstop prospects. This offseason, they have traded for Cliff Pennington and Gregorius. The club also has Chris Owings in its farm system.

Known for his control, the 23-year-old Spruill has a 3.58 ERA with 6.3 walks and 2.1 strikeouts over five minor league seasons. A second round pick of the Braves in 2008, Spruill spent last season at Double-A Mississippi, where he was 9-11 with a 3.67 ERA and a 1.26 WHIP in 27 starts. He projects as a back of the rotation starter in the majors.

Overall, this is a mutually beneficial trade because it arguably catapults the Braves lineup to the best in the National League and provides the Diamondbacks with the productive and versatile Prado and another high-ceiling starting pitcher in Delgado.

While Atlanta will battle Washington and Philadelphia for the NL East title, Arizona will be a formidable contender in the NL West, even without Upton, because of its pitching and its respectable lineup.