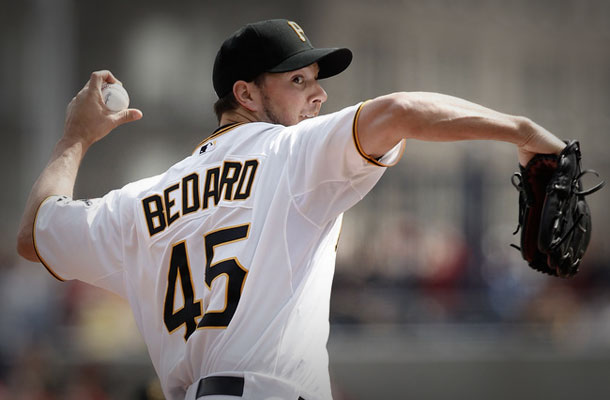 There has been a lot of big splashes this off-season. The Dodgers signed Zack Greinke to a six-year, $147 million deal. The Angels inked Josh Hamilton to a $125 million contract. Heck, even Jeremy Guthrie turned 91.0 IP of 1.30 ERA+, 3.16 ERA, 1.13 WHIP, and 2.95 K/BB baseball into a three-year, $25 million shocker. And barring injury or incredible levels of ineffectiveness, these players will most certainly be major factors on their respective organization’s active rosters.

Yet, there are also a lot of players who don’t quite share that blanket of security. In an attempt to pinch a penny or fill out a last-minute roster spot, teams also sign players to Minor League deals, in the hopes that they turn into the next R.A. Dickey.

Below are five players who were signed on Minor League deals with the potential to make Major League impact.

Considering the lowly Houston Astros are desperate for pitching, Bedard is more or less a lock to crack their rotation. It’s difficult to project the 33 year-old given his health history, and the toll it has taken on his effectiveness, but as long as Bedard’s curveball is on, he will still be able to sit down batters.

Bad WHIPs and high BABIPs aside, there is still value in a reliever that can side down batters (8.3 K/9 in 2012). Even though the Philadelphia Phillies bullpen appears to be set, they’re currently sporting three left-handed relievers; a luxury no Major League team boasts. Assuming the look to oust one of Antonio Bastardo, Jeremy Horst, or Raul Valdes, Cruz could find himself on the active roster, and mowing down opposing hitters.

HISANORI TAKAHASHI
After the 37 year-old Hisanori Takahashi combined for a 69 ERA+ and 5.54 ERA for the Angels and Pirates last season, it appeared as though the Japanese pitcher’s short Major League career was over. But the Chicago Cubs prudently threw him a life line.

Yet, all is not lost. In an attempt to salvage his for-sure fledgling career, Burke decided to change his delivery from a tradition upright motion, to a side-winding one. The result? A combined 1.53 ERA, 0.94 WHIP, and 3.33 K/BB over 64.6 IP between Double-A and Triple-A last season. In addition, Burke has also posted a 2.23 ERA, 1.08 WHIP, and 5.00 K/BB over 32.3 IP during Winter League this off-season.

With little talent to choose from, Greg Burke will likely be the fourth option out of the bullpen for the Mets in 2013–a situation few, including Burke, thought would be the case before this off-season.

ANDREW BROWN
Like Burke, Andrew Brown is another potential Sandy Alderson “diamond in the rough” Minor League signing. Even though the 28 year-old has done zip in the Majors (combined .224/.284/.396/.679 line in 148 PA’s), he does have quite the Minor League pedigree.

Given the Mets need for a platoon partner for Mike Baxter, the team will likely use Brown against left-handed hitters, considering he owned an explosive .321/.414/.612 line against them in the upper minors. The combination of Baxter and Brown in right field is hardly a lock to produce average production, but if all goes well (as in, best-case scenario), it could be a low cost, and surprisingly productive platoon.