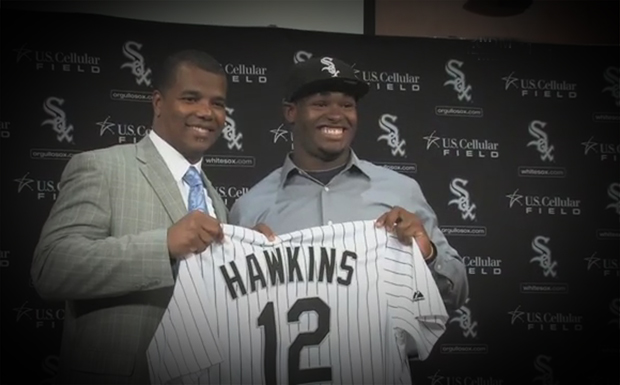 There was a changing of the guard on the south side of Chicago with longtime assistant general manager Rick Hahn taking over for Kenny Williams. The duo will still be working together with Hahn as the GM and Williams, who served as the White Sox general manager for 12 seasons, as senior vice president.

Like their crosstown rivals at Wrigley Field, the White Sox are striving to upgrade their farm system, which has recently harvested pitchers Chris Sale and Addison Reed. Over the last two seasons, Sale ( a left-hander) and Reed (a right-hander) have topped the White Sox prospects list. In 2013, outfielder Courtney Hawkins is widely considered the best minor leaguer in the system.

Here are the top 10 prospects in the White Sox system entering the 2013 campaign:

A first round pick (13th overall) out of high school last summer, Hawkins was impressive enough to play at three levels in the White Sox system, climbing all the way to advanced Single-A Winston-Salem just two months removed from playing prep baseball. He batted .294 in 17 at-bats there and hit .284 with eight home runs, 33 RBI, 11 stolen bases and a .804 OPS in 229 at-bats overall. Featuring a strong arm, Hawkins projects as a corner outfielder long term.

The son of former NBA player Mychal Thompson, the 21-year-old Trayce Thompson has raw power, belting 25 home runs last year between advanced Single-A and Double-A. Like Hawkins, Thompson is currently a center fielder but projects more as a corner outfielder with his strong arm and power bat.

A Futures Game participant last season, the 20-year-old Sanchez spent time at advanced Single-A, Double-A and Triple-A in 2012. The switch-hitter batted .323 with 26 stolen bases last year and is a plus defensive middle infielder who is a potential leadoff hitter at the Major League level.

A second round pick out of the University of California in 2011, the 6-foot-3, 240-pound Johnson has a live arm that features a mid-90s fast ball, a nasty slider and a developing change-up. Known for his durability, the 23-year-old right-hander posted a 2.53 ERA, a 1.20 WHIP and a.232 batting average against at low Single-A and advanced Single-A last year.

A fifth round selection out of Stanford in 2011, Snodgress pitched as a reliever that season but made 27 starts between low Single-A and advanced Single-A last year. With a plus heater and breaking ball, the 23-year-old Snodgress’ path to the majors would seemingly be faster out of the bullpen. If he improves his command and develops another pitch, he could emerge as a middle of the rotation type starter.

A supplemental first rounder out of Central Arizona College in 2011, Walker is a fleet-footed switch-hitter who stole 56 bases between two Single-A stops last season. He possesses raw power but has yet to show it at the professional level. He also must work on reducing his high strikeout numbers.

A supplemental first rounder out of high school in the Tampa area in 2012, Barnum has impressive bat speed and prodigious power. He is prone to striking out, but with his bat speed and power Barnum has a chance to emerge as a middle of the order run producer as he climbs the White Sox system.

A first round selection out of LSU back in 2009, the 24-year-old Mitchell is another White Sox prospect who has high strikeout numbers but can generate runs when he does make contact. For example, he belted 10 home runs and 12 triples, and stole 20 bases at Double-A Birmingham last season before a promotion to Triple-A Charlotte.

The 24-year-old Brazil native has a 3.30 ERA and 9.8 strikeouts per nine innings over six minor league seasons. His 2012 campaign was interrupted when he served a 50-game suspension for testing positive for illegal performance-enhancing drugs. Rienzo returned and logged 13 starts at Double-A Birmingham (3.27 ERA, 72 strikeouts in 72.1 innings) and one outing at Triple-A Charlotte where he did not allow an earned run in 6.2 frames.

The White Sox like Semien so much they drafted him in the 34th round out of high school in 2008 and then the sixth round out of the University of California in 2011. The 22-year-old right-handed hitter is not flashy, but he is steady and showed some pop with 14 home runs and 31 doubles in 418 at-bats at advanced Single-A Winston-Salem last year.