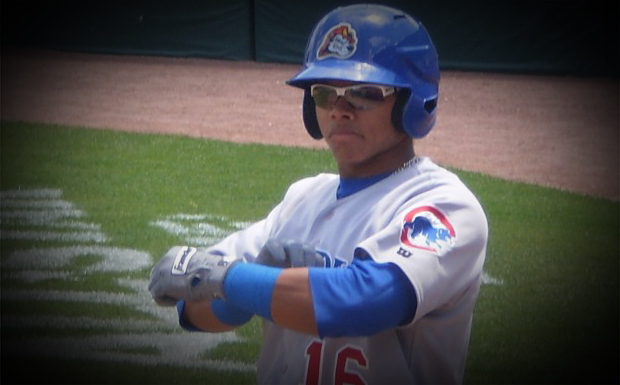 Just as he did when he was general manager of the Boston Red Sox, Cubs president Theo Epstein is focusing on building a contender at the Major League level by developing a deep and talented farm system.

Epstein and general manager Jed Hoyer have occupied the Cubs front office for a little more than a year, and already the organization’s depth is significantly better than it was before they arrived.

Over the next few seasons, the Cubs hope to see these players have an impact on the Major League roster, which already features homegrown talent like shortstop Starlin Castro, pitcher Jeff Samardzija, second baseman Darwin Barney and slugging first baseman Anthony Rizzo (who only played for the club’s Triple-A affiliate for a short stint after he was acquired from San Diego).

Here are the Cubs’ top 10 prospects entering the 2013 campaign:

Only 20 and slated to open the season at advanced Single-A Daytona Beach in the Florida State League, Baez is too early in his development to start talking about whether the Cubs will keep him at shortstop or move Castro to another position. Yet Baez, who was selected ninth overall out of high school in 2011, has such a high ceiling that the club will find a spot for him when he is Major League ready. He has a strong arm, so third base is a possibility, and he projects to hit for average and power.

The 18-year-old Almora was selected sixth overall out of high school last summer, and he is already projected as the Cubs’ center fielder of the future. Scouts like his leadership makeup, his work ethic and his versatile tools. Almora is above average at the plate, on defense and on the basepaths. He hit .321 in 140 at-bats between rookie ball and the Northwest League last season.

The 20-year-old Cuban defector is the Cubs’ premium international free agent prize and projects as a right fielder at the Major League level. Boasting a strong throwing arm and exceptional plate discipline, Soler is a potential middle of the order bat for the Cubs.

A highly regarded prospect since 2010, when he first experienced elbow problems, Vizcaino underwent Tommy John surgery last March and missed the 2012 season. That did not prevent the Cubs from getting him from Atlanta in the deal that sent Paul Maholm to the Braves last summer. A power pitcher with a plus fast ball, curve ball and change-up, the 22-year-old could emerge as a quality starting pitcher, or he might be better suited as a closer with his power arm and because of questions about his durability.

A first round pick (31st overall) out of the University of California in 2009, the 24-year-old Jackson made his Major League debut with 120 at-bats last season (.175 average, .303 on-base percentage). He is an intriguing prospect because of his mix of power, speed and the ability to draw walks. There are concerns about his high strikeout numbers (158 in 407 at-bats at Triple-A Iowa in 2012), but his plus defense and his ability to produce runs and steal bases could have him in the Cubs outfield to open 2013.

The beefy Vogelbach – who stands 6-5 and weighs in at 250 – boasts tremendous left-handed power. A second round pick out of high school in 2011, the 20-year-old Vogelbach also hits for average and demonstrates a mature plate approach. He hit .322 with 17 home runs, 62 RBI and a 1.052 OPS between rookie ball and the Northwest League last year.

Obtained from the Rangers in the Ryan Dempster trade, Villaneuva is a plus defensive third baseman who hits for average and knows how to get on base. He has power potential as well, though he currently is more of a line drive hitter. The 21-year-old Villaneuva was a shortstop when he signed with the Rangers, and he has played second base, so he is athletic. His strong arm and agility make him ideal for third base.

A supplemental first round pick (43rd overall) last year out of Missouri State, Johnson projects as a No. 3 or No. 4 starter and has the maturity to rapidly climb the Cubs farm system.

The 22-year-old Dominican Republic native features a strong arm, the ability to hit with power to all fields and speed. In his first full season at Double-A Tennessee in the Southern League last year, Lake hit .279 with 10 home runs, 50 RBI, 26 doubles and 21 steals.

The 19-year-old third baseman is a switch-hitting corner infielder who demonstrates an advanced hitting approach and power potential. Candelario is below average on defense, but he has a high ceiling because of his ability to hit for average and power.