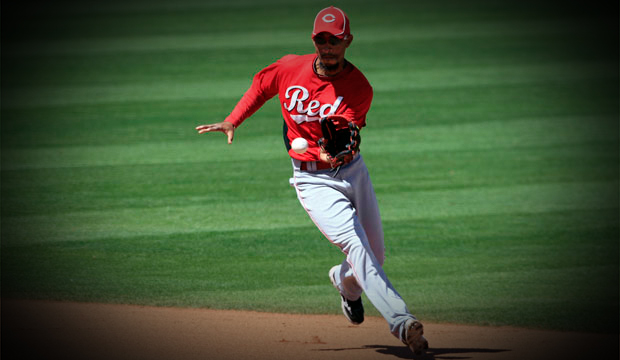 After dealing highly regarded prospects Yonder Alonso and Yasmani Grandal last offseason in the package that yielded starting pitcher Mat Latos, the Cincinnati Reds farm system lost some firepower. Yet the organization that has produced difference makers like Joey Votto, Jay Bruce, Aroldis Chapman, Homer Bailey and Todd Frazier among others in recent years has some intriguing names, but none moreso than speedster Billy Hamilton.

Ranked No. 10 on the Baseball News Source Top 10 Prospects List for 2013, Hamilton shattered Vince Coleman‘s single-season minor league stolen base record with 155 thefts last season. The Reds, which acquired Shin-Soo Choo from Cleveland earlier this offseason and plan to use him in center field, are transitioning Hamilton from shortstop (where he is error prone) to the outfield.

Here are the top 10 prospects in the Reds minor league system entering the 2013 season:

The second round pick out of high school in 2009 is a switch-hitter who owns a .289 average and a .364 on-base percentage over four minor league seasons, so he understands how to use his speed as an advantage to get on base. Hamilton is still working on improving his plate discipline so he can draw more walks and maximizing his stolen base potential. The Reds hope he will become their leadoff hitter for the long term.

A first round pick (27th overall) out of high school in 2011, the 19-year-old Stephenson boasts a fast ball that reaches 97, and a curve ball and change-up that are still being developed.

A third round selection out of Rice University in 2011, Cingrani was a reliever as a senior in college and then was moved into the rotation when he made his pro debut that summer. Over two minor league seasons and 39 games (including 38 starts), the 23-year-old southpaw boasts a 1.73 ERA, a 0.97 ERA and 252 strikeouts in 197.1 innings. He even posted a 1.80 ERA in five innings of relief for the Reds last September, summoned from Double-A.

Cincinnati’s first round pick (14th overall) out of high school last summer, the 18-year-old right-hander has a mid-90s fast ball, a slider and a change-up who is working to hone his command. Scouts like his delivery and his poise.

A supplemental first rounder (49th overall) out of high school in 2012, the left-handed hitting Winker batted .338 with a .443 on-base percentage and a .500 slugging percentage in 228 at-bats at Billings in the Pioneer League. The impressive pro debut has the Reds feeling good that he will deveop into a run-producing corner outfielder.

The 20-year-old Venezuelan left-hander was placed on Cincinnati’s 40-man roster this offseason after a breakout 2012 campaign that saw him post a 2.38 ERA, a 1.22 WHIP, a .222 batting average against and 90 strikeouts in 75.2 innings at Billings in the Pioneer League and low Single-A Dayton in the Midwest League.

Hamilton is not the lone base stealing threat in the Reds organization. Reynoso, a 20-year-old outfielder from the Dominican Republic, swiped 30 bases and hit .311 in just 50 games at the rookie level Arizona League last season. He drew just six walks in 205 plate appearances, so his plate discipline must improve, but he batted .311 in his first season of pro ball in the United States compared to .236 the previous year in the Dominican Summer League.

A third round pick out of the University of Memphis in 2012, Langfield owns a mid-90s fast ball along with an above-average slider and change-up that are still under development. He fanned 54 in 37 innings last summer at Billings while posting a 2.68 ERA and allowing just 27 hits. His power arm projects him as a reliever for the long term.

A second round choice out of the University of Michigan in 2010, LaMarre stole 30 bases at Double-A Pensacola in 2012 after swiping 55 between advanced Single-A and Double-A in 2011. The center fielder is proficient on defense and is disruptive on the basepaths, but he has yet to realize his power potential and has a .272 average and a .723 OPS over three minor league seasons, so he will have to improve at the plate to reach the majors.