Should The Red Sox Trade Ellsbury Sooner Rather Than Later? 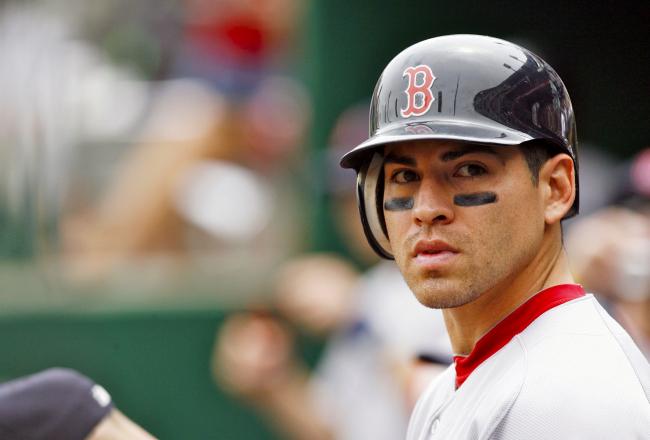 Trade Ellsbury ? The debate is rampant among Red Sox fans

With the addition of Shane Victorino, the Boston Red Sox outfield is seemingly set for the 2013 campaign with the right-handed hitting Jonny Gomes and perhaps the left-handed hitting Ryan Kalish in left, Jacoby Ellsbury in center and Victorino in right.

Or will the club make more moves?

Over the last couple days, speculation has spread about Boston trading Ellsbury, playing Victorino in center field and signing someone like Nick Swisher, Cody Ross or even Josh Hamilton to fill the right field vacancy.

According to Red Sox general manager Ben Cherington, Ellsbury will remain with the club next year, even though the 29-year-old Scott Boras client can depart via free agency at season’s end.

Trading Ellsbury this offseason is “not our intent,” Cherington told the Providence Journal.

“We’re expecting him to have a good year in 2013 and be part of what we’re doing,” Cherington added.

Whether Ellsbury remains with the Red Sox or is traded this offseason remains to be seen, but the debate is rampant among Red Sox fans.

Why trade him now ?

Since Ellsbury has one year remaining before he can become a free agent, and he is trying to rebound from an injury-plagued 2012 season, his trade value is dramatically lower than it would have been following his MVP-caliber 2011 campaign.

The Red Sox could deal Ellsbury for a starting pitcher and sign an outfielder like Swisher, Ross or Hamilton.

They could also keep him, take advantage of what might be an explosive 2013 season and then make him a qualifying offer and accept the draft pick compensation when he signs elsewhere next offseason.

So far during the Hot Stove League, Cherington has kept Boston’s second round pick in next summer’s draft by not signing a player who was extended a qualifying offer from his 2012 team.

The club’s first round pick, No. 7 overall, is protected, so the Red Sox would have to surrender its second round selection (which would likely be anywhere from No. 40 to No. 44) if they brought aboard someone like Swisher or Hamilton.

Ross, of course, played for Boston in 2012 and would not cost a draft pick.

Though the Red Sox overpaid a bit for the three years and $39 million they gave to Mike Napoli and Victorino, they did so because they have payroll flexibility and they are adamant about avoiding long-term deals.

This means Boston will probably stay out of the Zack Greinke bidding, and it will not touch Anibal Sanchez unless he is open to four years instead of six years.

With this in mind, Cherington is reportedly interested in acquiring a starting pitcher who is under reasonable team control (meaning he has at least two years before he is eligible for free agency) to join Jon Lester, Clay Buchholz, Felix Doubront and John Lackey in the rotation.

Ellsbury could bring back a starting pitcher that fits this description.

If the Red Sox do this, they could keep next summer’s second round pick and re-sign Ross, they could add flexibility by inking the switch-hitting Swisher (who can play right field and first base) or make a cannonball splash by signing Hamilton (who play right field and center field, and give the club a slugger to accompany David Ortiz and Napoli in the heart of the order).

Should Boston keep Ellsbury for the 2013 season, it can add an arm like Brandon McCarthy or Ryan Dempster to the rotation, or complete a trade with the Indians for Justin Masterson and possibly shortstop Asdrubal Cabrera.

Because of their payroll flexibility, the Red Sox can add the pieces to contend in 2013 with or without Ellsbury.

They have top prospect Jackie Bradley poised to take over for Ellsbury in center field in 2014, or they could place Victorino in center, add Swisher or Hamilton in right field and include Bradley in a trade.

It is extremely unlikely that Ellsbury will be brought back by the Red Sox after the 2013 season since he is represented by Boras and will demand a long-term deal of five years or more at an annual salary that could hamstring Boston’s efforts to make other moves.

The front office learned its lesson from the deals dished out to Carl Crawford and Adrian Gonzalez.

It would be a surprise if they repeated that with Ellsbury.