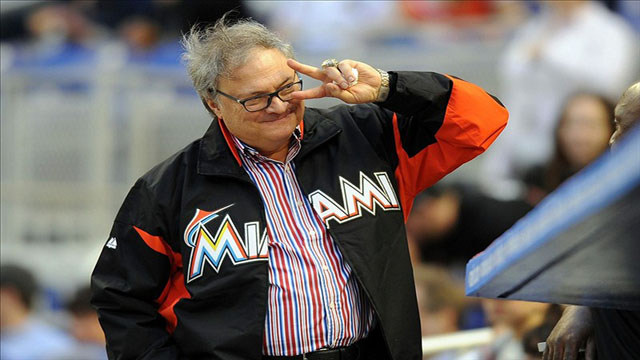 “The damage to the Marlins’ ‘brand’ is impossible to calculate.”

Baseball, often derided for it’s uncapped, laissez-faire player market that rewards deep pockets like the Yankees and Dodgers, is home to some of the most insatiable welfare pigs in professional sports.

Jeffrey Loria and David Samson, respectively the Owner and President of that fluorescent pile of rubble that used to be the Miami Marlins, are two such freeloaders.

The Marlins are now infamous for having imploded their roster for a third time in 20 years under the stewardship of Loria and Samson, but this time without having so much as the decency to buy a World Series title before they began planting the charges. More than $185 million in salary obligations were sent north of the border in the trade with the Blue Jays.

Almost to a man, every response to the deal has been negative.

The Nation‘s Dave Zirin was on point when he described Loria as “the Ebola Virus of sports owners.” Yahoo!’s Jeff Passan nailed it when he called the fiasco a “conspiracy,” one in which MLB Commissioner Bud Selig, who oversaw Loria’s predatory deconstruction of the Montreal Expos and allowed him to purchase the Florida Marlins anyway, is more than complicit. ESPN’s Jerry Crasnick said of the firesale: “The damage to the Marlins’ ‘brand’ is impossible to calculate.”

All scathing commentary. All correct.

Jeff Loria is a genius, in a nihilistic sort of way. His pilfering of some $500 million in county and municipal funds for the construction of the new stadium was a low point in sports business and local politics to begin with.

If this was Loria’s own ugly-baby of a stadium, that would be between he and his architect. The problem is that it was built with taxpayer money: $2.4 billion over the next 40 years to be exact. The elected officials of cash-strapped Miami-Dade County took Loria’s word the team was going bankrupt and would cease to exist without a new ballpark. These claims of bankruptcy we now know were lies after the website Deadspin posted leaked financial documents that told a very different story.

That Miami-Dade county approved bond payments that mature to almost $2.5 billion over the next four decades for the privately owned ballpark of a serial franchise looter is bad enough. That no elected officials allegedly even asked to see the Marlin’s balance sheets (balance sheets which turned out to be much healthier than Loria or Samson let on in their “help us or we’re taking our team elsewhere” routine) is a scandal in and of itself.

So scandalous, in fact, that the public financing of that phosphorescent monument to selfishness is the subject of federal investigation by the Securities and Exchange Commission.

Municipal illegalities aside, what the Marlins have done to the free agent and trade market (especially in the midst of the Dodgers’ historic spending binge) is a coup of MLB’s revenue sharing system and uncapped player market.

Baseball is the lone holdout among the big four American leagues in terms of capped and uncapped markets. They’ve been able to justify the health of their small-wallet franchises by pointing to their unrivaled revenue sharing system—one which is set to explode in 2013.

On Tuesday, Major League Baseball announced the 2nd and 3rd legs of the new national television rights deal.  Maury Brown over at the Biz of Baseball has a great breakdown on each individual deal.  All of the deals run from 2014 to 2021 (8 seasons) and have a combined worth of $12 BILLION dollars (if you want to say it like Dr. Evil, be my guest), which equates to $1.5 billion per season to share among 30 teams.  That means each team will get $50 million right from Jump Street, or just $1.9 million less than the Pirates’ opening day payroll of $51.9 million.

That’s free money, and lots of it. $50 million in revenue sharing going straight to Loria’s pockets before the Marlins put 2,500 fans in the seats for the first time next April. And just as baseball’s Randian market works for teams on the rich end of the spectrum, there’s also no limit to how little a team must spend on its payroll.

The opposite is the case in the NHL, for example, where the last CBA stipulated a salary floor that grew in proportion to the salary ceiling. The rich were to be prohibited from outspending the poor, while the poor were blocked from under-funding their ability to compete.

No such luck in the lost land of Seligball.

The end result is that — although the Marlins began their 2012 season with a payroll hovering right around $100 million — the payroll commitment to their remaining 2013 roster was about $16 million. Easily the biggest payroll dump in recent memory. Counting the players that the Marlins will receive back in the trade, along with their lone arbitration-eligible player, the current payroll is $25 million.

Credit Samson and Loria for their shrewdness, if you must, but don’t credit them for long-term growth. The sell-off wasn’t the result of a last-place finish and the stadium wasn’t the antidote to enticing offers of relocation and staggering financial losses. These Snidely Whiplash-ian plutocrats have their millions, their ballpark and the league’s stamp of approval.

Pending a harsh about-face by Teflon Bud or the SEC, they’ll be able to sell their new stadium and ever-more valuable (as a result of revenue sharing and stadium equity) franchise, pocketing the difference while Florida public schools have to shill for desks and police and fire unions watch their pensions go up in smoke.

In a just world, these two are behind bars. But this is baseball. And in Selig’s complicit, near-catatonic version of the post-Don Fehr MLB, the market knows best.