Marlins – Who is Left to Trade – Nolasco, Morrison, Stanton ? 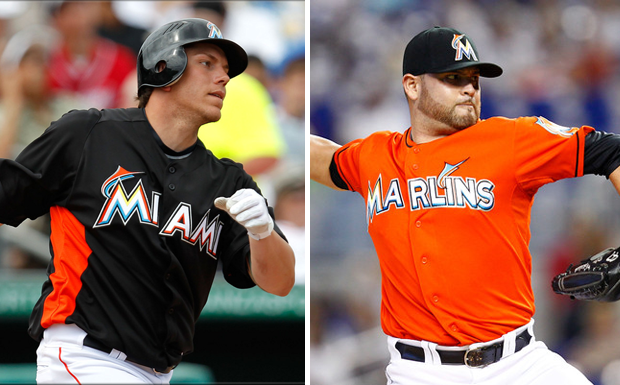 The Marlins may not yet be done dealing players

Ricky Nolasco and Logan Morrison might want to stay close to the phone. Morrison is reportedly being shopped and Nolasco is expected to be traded.

Tuesday’s trade removes about $160 million of base salary commitments off Miami’s books.

Nolasco has one year and $11.5 million remaining on his contract with the Marlins. While there may not be a sense of urgency to move Morrison who is not arbitration eligible yet, the Marlins will entertain offers for the 25-year-old outfielder/infielder who hit .230 with 11 home runs and 36 RBI in 93 games this past season. Morrison underwent knee surgery in September.

The Yankees are reportedly checking in with the Marlins about Nolasco. Nolasco is owed $11.5 million in 2013, which aligns perfectly with the parameters the Marlins are apparently using to make trades. In other words, he makes too much money. Nolasco pitched to a 4.48 ERA this past season and is due to hit free agency next year.

Giancarlo Stanton who has expressed his displeasure over the team’s dealings in no uncertain terms reportedly remains untouchable, at least for 2013. Stanton has hit 93 home runs in 373 games and being called up in June of 2010. Stanton is under team control for one more season before he becomes arbitration eligible. So for now, the team says they will hang on to Stanton.

Does anyone in baseball think that if the offer was right the Marlins would not move Stanton as well?