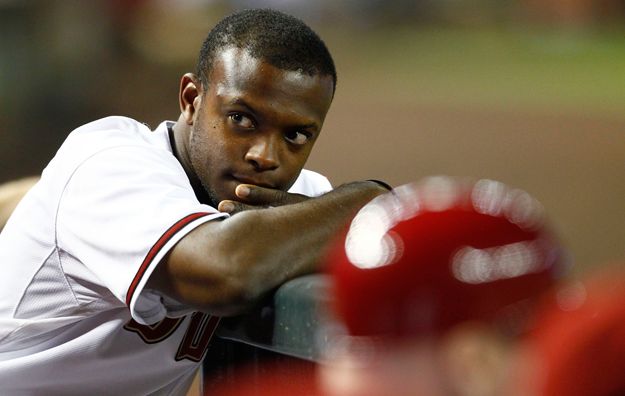 Amid the annual general manager meetings this week, it was learned that the Arizona Diamondbacks are interested in dealing outfielder Justin Upton for a healthy return that “makes the Diamondbacks better.”

Josh Hamilton, Michael Bourn and B.J. Upton are considered the premiere free agent outfielders this offseason, yet it is the younger of the Upton brothers (Justin Upton is 25 while B.J. Upton is 28) who is drawing significant trade interest because he is under team control through the end of the 2015 season and has yet to enter his prime.

Hot Stove League talk escalated this week at the general manager meetings. Here is a position-by-position look at some of the most significant news and rumors:

New Cleveland Indians manager Terry Francona says he is excited about reuniting with 27-year-old right-hander Justin Masterson. The pair became familiar with one another when Francona managed Masterson in Boston. Masterson, though, is the subject of trade rumors along with teammates outfielder Shin-Soo Choo, shortstop Asdrubal Cabrera and closer Chris Perez.

While Zack Greinke is the gold standard offseason free agent starting pitching prize – and names like Anibal Sanchez, Dan Haren, Hiroki Kuroda, Edwin Jackson, Ryan Dempster, Jeremy Guthrie and Francisco Liriano are sure to attract a flurry of offers – younger pitchers under team control available via trade will be enticing for many clubs. Miami’s Josh Johnson and Tampa Bay’s Jeremy Hellickson and David Price are other examples.

Regarding Sanchez, using the five-year, $77.5 million contract C.J. Wilson signed last offseason with the Angels as a guide, the 28-year-old right-hander is reportedly seeking six years and $90 million. That is a hefty price tag for a pitcher who has shown flashes of dominance but overall is 48-51 with a 3.75 ERA over seven Major League seasons and has reached double digits in wins just twice (10 in 2006 and 13 in 2010).

The Los Angeles Dodgers appear content with A.J. Ellis as their starting catcher and Tim Federowicz as the backup, but the Boston Red Sox (which once had Federowicz in their farm system) are reportedly interested in free agent backstop Russell Martin, who has played with the rival New York Yankees the last two seasons.

If Boston is indeed interested in Martin, that suggests the club is not content with the current catching tandem of Jarrod Saltalamacchia and Ryan Lavarnway. Considering that Martin has power in his right-handed bat, and the switch-hitting Saltalamacchia is much better from the left side, perhaps the Red Sox are open to dealing the young and promising Lavarnway, who has a powerful right-handed bat but struggled in a late season stint in the majors in 2012.

The Mariners are among the teams interested in free agent Mike Napoli, who is regarded as a part-time catcher who can play first base and DH. The Mariners have the highly regarded Mike Zunino in their farm system, but he is not deemed Major League ready for 2013.

Many teams appear to be set on keeping their yet-to-be free agent first basemen. The New York Mets will hold onto Ike Davis and Lucas Duda, according to the New York Post. Media reports speculated that the club would trade Davis and move Duda to first base, but Sherman indicates that the two young players with significant upside will remain in Queens.

The San Francisco Giants are apparently fielding calls about Brandon Belt, a 24-year-old first baseman. The offensively-starved Rays might try to pry Eric Hosmer from the Kansas City Royals for a pitcher like Jeremy Hellickson.

Napoli, Adam La Roche and Nick Swisher (who can also play the outfield) are the most sought after free agent first basemen. Washington has expressed interest in re-signing LaRoche, but the 33-year-old left-handed hitter is attracting calls from a myriad of teams, including the Red Sox. Since Boston does not have a promising first base prospect in its farm system, LaRoche is a name that the team might consider giving a three-year deal.

The Blue Jays announced the signing of Maicer Izturis, who can play second base, shortstop and third base.

Robinson Cano is not a free agent this offseason, but he can enter the market after the 2013 campaign. According to Joel Sherman of the New York Post, Cano will cost a bundle because he believes he has already signed one team-friendly contract with the Yankees.

The free agent market for shortstops is extremely lean, which explains why Mike Aviles attracted so much interest before Toronto dealt him to Cleveland. Aviles can play second base and serve as a super utility player, but his presence with the Indians could indicate the club is open to trading soon-to-be 27-year-old Asdrubal Cabrera.

Since it appears the Texas Rangers are not interested in dealing current shortstop Elvis Andrus or phenom Jurickson Profar, the Arizona Diamondbacks might pursue Japanese free agent shortstop Hiroyuki Nakajima. The Oakland A’s, which also need a shortstop since they traded Cliff Pennington to Arizona and are evidently not willing to bring back free agent  Stephen Drew, are another candidate to ink Nakajima.

Arizona and Oakland could be suitors for Cincinnati’s Zach Cozart or Didi Gregorious. According to Fox Sports’ Jon Paul Morosi, the Reds are open to trading one or the other if the transaction yields a closer or a leadoff hitting outfielder.

The often-injured Jed Lowrie could be a trade candidate, but Houston Astros general manager Jeff Luhnow says he would like to see what Lowrie can do if he remains healthy over the course of a full season.

According to Jon Heyman of CBSSports.com, the White Sox are talking to Kevin Youkilis about returning to play third base in 2013. The Phillies and Indians are also reportedly interested.

Considering that Youkilis has been hampered by injuries the last two seasons, first base seems a better position for him than the physical demands of the hot corner. Youkilis will play first base in Cleveland since the Indians are committed to Lonnie Chisenhall.

The Phillies avoided arbitration with 30-year-old third baseman Kevin Frandsen and signed him to a one-year, $850,000 deal. Frandsen, who can play multiple infield positions, hit .338 in 210 at-bats as Philadelphia’s everyday third baseman when Placido Polanco was sidelined. Polanco is a free agent.

Frandsen is best suited as a utility player, and the Phillies will surely pursue a more proven third baseman since they expect to be World Series contenders in 2013.

According to Fox Sports’ Ken Rosenthal, who spoke to agents and team executives, the 31-year-old Hamilton will likely end up with the Washington Nationals, the Baltimore Orioles, the Philadelphia Phillies or the Seattle Mariners.

The latter is perhaps the most interesting scenario. The Mariners are moving in the fences at Safeco Field and the club has an array of top pitching prospects who are almost Major League ready and can join uber ace Felix Hernandez and complementary arms like Jason Vargas and Hisashi Iwakuma.

As for Upton, the Diamondbacks and Texas Rangers appear to be ideal trade partners except, as previously mentioned, the Rangers reportedly will not trade Andrus or Profar, who is projected as  Major League shortstop but can play third base as well. Texas is willing to part with corner infielder Mike Olt, who is a highly regarded prospect himself, but the Diamondbacks are most in need of a shortstop.

With David Ortiz signed to a two-year deal, the Boston Red Sox are focusing their attention on acquiring two outfielders, either by trade or via free agency, according to general manager Ben Cherington.

Since they need to add two outfielders, multiple media reports indicate that Boston is not likely to trade center fielder Jacoby Ellsbury, who can file for free agency after the 2013 campaign.

The Red Sox believe that Ellsbury will be motivated to produce big numbers in a contract year, and if they cannot sign him to an extension they will at least make him a qualifying offer next season so they get draft pick compensation if he signs elsewhere.

With Ortiz off the market, the Rangers and Orioles will have to pursue other DH options. Those clubs were reportedly prepared to offer Ortiz a multi-year deal if the slugger did not re-sign with Boston.