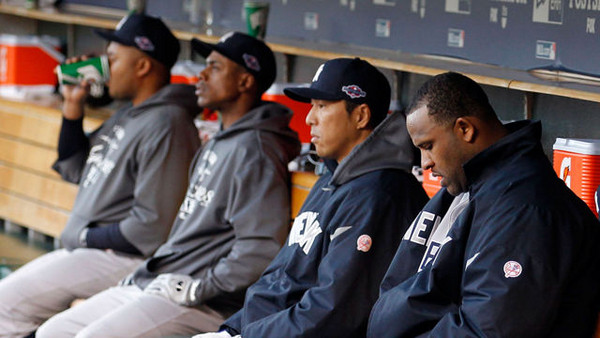 When Jayson Nix‘s pop up settled into Prince Fielder‘s glove and the Detroit Tigers celebrated their four-game sweep of the New York Yankees and American League pennant, the vast majority of America shared in their jubilation.

There are a myriad of reasons why almost every baseball fan who does not bleed pinstripes detests the Yankees and experiences a heaping dose of schadenfreude (a German word that means pleasure derived from the misfortune of others) when that team from the Bronx flops in October.

The Yankees are associated with 27 World Series championships in their long and storied history. They are also linked to a heritage of arrogance, a sense of entitlement and the spoils of having the unmatchable financial advantages that playing in New York City provides.

Yankees fans are also tied to a plethora of negative words. Pompous, intolerable, brash and unpleasant are four that immediately surface and aptly describe many of these people.

Across the nation, Yankees fans with a rigid, in-your-face approach swiftly remind you of their team’s 27 rings (though many of those titles were won long before a lot of these fans were alive), yet they are nowhere to be found when their club falls into a four-game losing skid or receives a beating in the playoffs.

There are exceptions to the rule, of course, but the widely known stereotype of Yankees fans exists for a valid reason.

Simply put, the Yankees are difficult to like. It is good for baseball as a sport when the Yankees falter in the postseason. Because of their seemingly unlimited payroll that allows them to trade for and sign big names in the off-season and add difference makers at the trade deadline, they fill their roster with superstars instead of crafting a true team of hungry youngsters, prominent core members and scrappy role players.

With the financial resources and the big names that dot their lineup card, the Yankees have no excuse not to reach the postseason. Whereas every other ballclub (yes, even other big market teams like the Red Sox, Phillies, Angels, Dodgers, Mets, Cubs and White Sox) considers a journey to the playoffs as a gauge for a successful season, for the Yankees, anything less than a World Series berth should be viewed as a failure.

If you want someone to blame for the reason the Yankees are so disliked by the vast majority of people who are not Yankees fans,  look no further than the late George Steinbrenner. The owner demonstrated a passion for winning, literally at any cost. He negatively changed the landscape of baseball by paying exorbitant salaries to free agents – leading owners of other teams to do the same and throw off the competitive balance of the sport that still exists today (even with revenue sharing and the luxury tax threshold).

While there are teams in other sports that fans love to hate because of their track record of success – like the Los Angeles Lakers and Boston Celtics in the NBA; and the Pittsburgh Steelers and Green Bay Packers in the NFL – these franchises sustain success because of stability in the front office and an ability to identify and develop talent. The NBA and the NFL are both governed by salary caps so every team in each league has a greater chance of success than in Major League Baseball.

Though big market teams in baseball have no excuse for a lack of success either, they do not have the same financial advantages that the Yankees boast. Because of those resources, they are able to overpay for free agents from other clubs and retain their homegrown players when they reach arbitration years and approach eligibility for free agency.

This is why it is unlikely the Yankees will ever experience a season like the 2012 Red Sox, when despite a hefty payroll they could not overcome a rash of injuries to core players and ended up jettisoning underperforming and high-cost names like Josh Beckett, Carl Crawford and Adrian Gonzalez to the Dodgers so they could hit the reset button and plan for 2013 and beyond.

When the dust settled from being on the wrong side of their four-game sweep in the ALCS, Yankees officials will determine how to proceed for 2013. They are stuck with the gaudy contract of Alex Rodriguez, who was relegated to the role of a $30 million platoon player this postseason. He is hampered with an aging body and has five years and $114 million remaining on his contract. His numbers do not reflect that of a player who will be paid $28 million in 2013.

Mark Teixeira ($22.5 million a year through 2016) and Curtis Granderson ($13 million option for 2013 or a $2 million buyout) are two additional Yankees whose stats do not translate to money well spent for the production the club is getting.

Now, with 38-year-old Derek Jeter undergoing ankle surgery, it is uncertain if he will have enough range to play an effective shortstop. He is  owed $17 million in 2013 with an $8 million player option in 2014.

Robinson Cano, who is one of the best all-around hitters in the game, struggled in ALCS and the Yankees have a $15 million option on the second baseman for 2013 that will surely be picked up. The club must decide if they want to sign him to an extension, trade him or let him depart via free agency.

Mariano Rivera says he will return in 2013, but who knows if he will ever regain his Hall of Fame form after recovering from a torn ACL in his right knee earlier this year. Rivera will be 43 in November, and Father Time spares nobody.

Of course, the Yankees are the Yankees. Though general manager Brian Cashman makes his annual statement that the team is placing a greater emphasis on developing its own players – a la the 90s when Jeter, Rivera, Jorge Posada, Bernie Williams and Andy Pettitte ascended through the farm system – they will spend plenty this off-season. The Yankees will open their vault to find starting pitching beyond Sabathia, perhaps find a replacement for Nick Swisher if he is not re-signed and maybe even pay the majority of what is left on A-Rod’s contract so he can join the Miami Marlins.

If the latter happens, then the Yankees might also have to take on the weighted contract of reliever Heath Bell, and then there would be the matter of finding a new third baseman because a gutsy role player like Eric Chavez just wouldn’t satisfy the the win at all costs motto of Hank and Hal Steinbrenner, and Randy Levine.

Baseball has certainly changed since even the late 90s, when the Yankees captured three World Series titles in a row. Touting the game’s highest payroll by a significant margin does not guarantee the ultimate success. Teams like St. Louis and San Francisco have shown that in recent years. Yet the bountiful resources that the Yankees have and the remaining 29 teams in MLB lack still gives them an advantage that holds them to higher standards.

Win the American League East? Well, you should. Advance deep into the postseason? No reason you shouldn’t. Lose in the playoffs and fall short of celebrating a World Series title? Much of America will treasure this just like they would a winning lottery ticket.

Beyond the wide lot of insufferable fans that wear the pinstripes (at least when the team is in first place or still alive in the postseason), most baseball enthusiasts are smiling with the knowledge the Yankees were dismissed by the Tigers in a sweep.