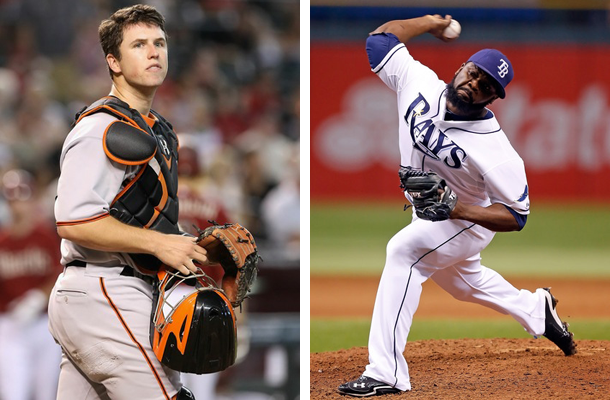 Buster Posey and Fernando Rodney were named Comeback Player of the Year in their respective leagues as voted on by MLB.com.

Posey  had a .336 batting average with 24 home runs and 103 RBIs, received 27 of 30 first-place votes from MLB.com, and will be a leading candidate for the National League MVP Award.

Posey was involved in a horrific collision at home plate with Florida’s Scott Cousins on May 25, 2011. He sustained a fractured bone in his lower left leg and torn ligaments in his ankle. Posey was ready for the start of spring training, but the Giants were very cautious, limiting his activity to minimize the risk of reinjuring himself.

Rodney pitched just 32 innings in 2011 for the Los Angeles Angels. He returned home to the Dominican Republic, worked hard and waited for an opportunity to pitch.

“I worked hard in the off-season last year,” Rodney said, “so I could get an opportunity to trust the stuff I have and be in the game.”

The Tampa Bay Rays thought enough about him to sign him to a one-year deal that paid him $2 million with a club option for 2.5 million in 2013.

Rodney was not expected to be the Rays closer. Kyle Farnsworth experienced arm troubles, a carryover from 2011 and began the season on the disabled list, opening the door for Rodney.

Rodney quickly became a fan favorite with this fun-loving approach to the game. Rodney wears the bill of his cap this turned slightly to the left, a tribute to his deceased father,and after recording a save would turn and shoot an imaginary arrow into the sky.

Rodney broke a record that had stood since 1990 when he ended the season with a 0.60 ERA, the lowest ERA by a reliever, with at least 50 innings. He saved 48 games in 50 attempts.  Dennis Eckersley held the previous mark at 0.61. Rodney will likely get AL Cy Young consideration. Last season’s Comeback Player of the Year winners were Jacoby Ellsbury and Lance Berkman,