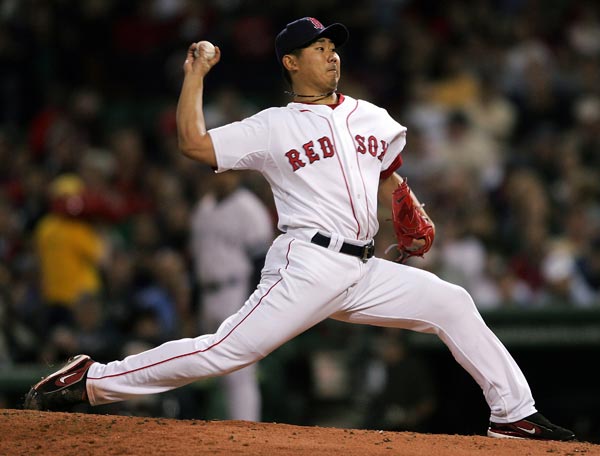 Kansas City 1 – Boston 5 – Daisuke Matsuzaka pitched seven strong innings, striking out six, walking to and allowing five hits and one unearned run and the Red Sox beat the Kansas City Royals 5-1. Jacoby Ellsbury homered for the Red Sox. Luke Hochevar pitched a complete game in the loss for the Royals.

Chicago 3 -Baltimore 4  – Nate McLouth and Lew Ford homered for the Orioles and  Jim Johnson picked up his 40th save of the season to back up a strong performance by Orioles starter Wei-Yin Chen, who pitched six innings allowing one earned run and struck out eight, the Orioles beat the White Sox 4-3. Kevin Youkilis hit his 16th home run of the season for Chicago.

Oakland 3 -Cleveland 0  – In his second start since returning from Tommy John surgery,  Brett Anderson allowed two hits over seven innings of work and the Oakland Athletics beat the Cleveland Indians 3-0. Grant Balfour saved his 15th game of the season for the A’s.

Toronto 8 -Yankees 7 – Toronto Blue Jays scored three runs in the ninth inning when Colby Rasmus hit a three-run homer off New York Yankees closer Rafael Soriano to take the lead 7-6, only to give the run right back in the bottom half of the night, when Derek Jeter hit a solo home run off of Casey Janssen. an error by Derek Lowe proved to be costly and the Blue Jays edged the Yankees 8-7. Robinson Cano hit two home runs, Nick Swisher added a two-run blast the Yankees.

Tampa Bay 5 – Texas 6 – The Tampa Bay Rays got into a slugfest with the Texas Rangers and lost 6-5. Adrian Beltre hit a home run and had four RBI to lead the Rangers. David Price gave up a season-high six runs and 10 hits in four innings of work. Evan Longoria homered for the Rays and Desmond Jennings had two hits and two runs scored for Tampa Bay.

Seattle 1 -Minnesota 0  –  Eric Thames hit a solo home run in the eighth inning for the Mariners only run against the Minnesota Twins. Felix Fernandez did his part to make that one run stand up pitching a five hit shutout, striking out five and walking just one. He completed the gem with 100 pitches, and lowered his ERA to 2.43