The 9 Best Baseball Movies and a DH 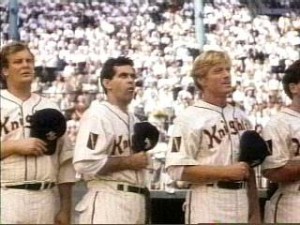 This list is based strictly off my personal preferences of watching baseball and the movies that were made about them.

It was hard for me to decide between The Natural and For the Love of the Game, so rather than stress about that, I thought it best to simply place them both in the number one position.

1.The Natural – Roy Hobbs, a mysterious middle-aged ballplayer with an unknown past appears to play on a last place ball club, the Knights. When Hobbs begins to dominate and take the Knights into first place he must face the demons of his past. Can Hobbs continue his dominance while dealing with past and present off-field problems?

For the pure drama of baseball it doesn’t get much better than this. Roy Hobbs ( Robert Redford ) may be a fictional character, but his name is quoted all over news publications and websites.  An example? “he is putting up Roy Hobbs numbers”  Released in 1984, the movie gets better as the years go by. Much of the plot is Hollywood dramatized, but it doesn’t seem to matter. The film follows Hobbs as a youngster until his final playing days, with a few stops in between.

1. For the Love of the Game – Detroit Tiger legend Billy Chapel is pitching what may be the final game of his career. Chapel, facing the Yankees, begins to flashback to the last 4 years spent with the women he loves, Jane Aubrey, who earlier that day told him it was over and she was taking a job in London.

This movie much like The Natural we  see the Billy Chapel ( Kevin Costner ) playing catch with his dad as a kid and we get to see him pitch his last game. As he is pitching a perfect game, flashbacks provide memories of his career and his relationship with Jane Aubrey ( Kelly Preston). Baseball and a love story is the perfect combination for a good movie.

2. Field of Dreams – An Iowa corn farmer, hearing voices, interprets them as a command to build a baseball diamond in his fields; he does, and the Chicago Black Sox come.

Another Kevin Costner baseball movie makes my top five. It’s not very realistic, but who cares, my absolute favorite scene in the movie is when James Earl Jones defines baseball, “The one constant through all the years, Ray, has been baseball. America has rolled by like an army of steamrollers. It’s been erased like a blackboard, rebuilt, and erased again. But baseball has marked the time. This field, this game, is part of our past, Ray. It reminds us of all that once was good, and that it could be again. Oh, people will come, Ray. People will most definitely come…

Forget the fact that the movie failed to mention that a large part of the success of the Oakland A’s in 2002 was a pitching staff that included Tim Hudson, Mark Mulder, and Barry Zito, not to mention a shortstop by the name of Miguel Tejada. Tejada and Zito would go on to win the American League MVP and Cy Young Award. I loved this movie the first time I saw it, and I’ve probably watched it 20 times since. While the traditional romance is missing from the plot, the relationship between Billy Beane ( Brad Pitt ) and his daughter is enough to make grown men weep. This movie will likely rise on my list as time goes by, much the way The Natural has.

4. The Sandlot – Scotty Smalls is new to the neighborhood, but his lack of baseball talent is making it hard for Smalls to fit in. When Benny “The Jet” Rodriguez recruits Smalls to play with his neighborhood gang at a nearby sandlot, a whole new summer experience awaits.

You likely won’t find this movie on many baseball fans top 10 list, but I grew up in this era when kids would play baseball in sand lots or empty fields, and it hits home with me on so many levels, and who didn’t have a Wendy Peffercorn in their neighborhood. I like to fancy myself as a cross between Benny and Squints.

5. A League of Their Own – Jimmy Dugan, Tom Hanks, has been hired to coach in the All-American Girls Baseball League of 1943 while the male pros are at war. Dugan, now a drunk has-been, unexpectedly discovers these girls can play ball! Now Dugans must manage the Rockford Peaches as they try to swing their way to a World Series title.

Yeah it’s girls baseball but it’s a great movie nonetheless. Madonna and Rosie O’Donnell are not two of my favorites, but they are in this movie. Kept hoping that (Geena Davis) and  (Jimmy Dugan) Tom Hanks would get together, plus the film gave us the quote, ” there’s no crying in baseball”.

6. Bull Durham – A fan who has an affair with one minor-league baseball player each season meets an up-and-coming pitcher and the experienced catcher assigned to him.

Let’s face it, Kevin Costner is just good in baseball movies and this one has some memorable quotes , “Your shower shoes have fungus on them. You’ll never make it to the bigs with fungus on your shower shoes. Think classy, you’ll be classy. If you win 20 in the show, you can let the fungus grow back and the press’ll think you’re colorful. Until you win 20 in the show, however, it means you are a slob.”  And of course this edited classic, “Well, I believe …..the small of a woman’s back, the hanging curve ball, high fiber, good scotch, that the novels of Susan Sontag are self-indulgent, overrated crap. I believe Lee Harvey Oswald acted alone. I believe there ought to be a constitutional amendment outlawing Astroturf and the designated hitter. I believe in the sweet spot, soft-core pornography, opening your presents Christmas morning rather than Christmas Eve and I believe in long, slow, deep, soft, wet kisses that last three days’

7. The Stratton Story – The true story of Chicago White Sox pitcher Monty Stratton. In the 1930s, Stratton compiled a record of 37-19 over three seasons and was recognized as one of the top pitchers in the American League. However, a freak hunting accident leaves Stratton without his right leg and further, his ability to play baseball. With the encouragement of his wife, Stratton is determined to return to baseball using his new wooden leg.

I’ve probably seen this movie 25 times, maybe more.  Made in 1949 the movie is full of the wholesomeness you expect  from movies in that era. Jimmy Stewart played the role of Monte Stratton brilliantly, and I never really grow tired of looking at June Allyson.

8. Bang The Drum Slowly– The story of two New York baseball teammates Henry Wiggen, the star pitcher, and Bruce Pearson, a normal everyday catcher. Over the off-season, Bruce learns that he is terminally ill, and Henry, is determined to be there for him during the trials of his final season. Throughout the season, they both learn what true friendship is while making Bruce’s last season a memorable one.

I took my girlfriend in high school to see this movie in 1973, and honestly, I wasnt thinking about baseball or banging a drum , but found myself asking at the end of the end, why am I crying at a basbeall movie, I would discover later those kind of movies turned out to be my favorite kind.

The Pride of St Louis – Based on the true story of Arkansas mountain boy Dizzy Dean who’s baseball talent turns him into a baseball legend as a St. Louis Cardinals pitcher. When an injury brings his career to an early end, Dizzy must rely on his sense of humor to become one of America’s best-loved sportscasters.

As a youngster I remember watching Saturday baseball games called by Dizzy Dean and Pee Wee Reese and for that reason this movie gets on my list. I suppose a lot of people make fun of the way he talked. Growing up in the South he sounded perfectly normal to me.  An English teacher once wrote to him, complaining that he shouldn’t use the word “ain’t” on the air, as it was a bad example to children. On the air, Dean said, “A lot of folks who ain’t sayin’ ‘ain’t,’ ain’t eatin’. So, Teach, you learn ’em English, and I’ll learn ’em baseball.” Ain’t nothing wrong with that !