Fueled by the best record in the majors at 73-45 and boasting the best pitching staff is baseball statistically, the Washington Nationals are one of the game’s most compelling stories in 2012. Fan interest is high because the franchise is nearing its first post-season berth since moving to the nation’s capital, and since the roster is dotted with exciting young players.

Yet, when October arrives, one of the club’s two phenoms will not be found on the diamond, at least if team officials stick to their original plan. 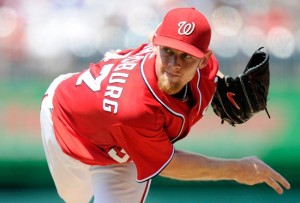 All season long, the Nationals have insisted that Strasburg will be shut down for the season once he reaches an innings limit. Right now, it is uncertain whether that cap is 160 innings, 170 innings or another number.

Stephen Strasburg, who like rotation mate Jordan Zimmermann is a National League Cy Young Award candidate, limited San Francisco to two runs and four hits over six innings on Wednesday night in Washington’s 6-4 victory. The 24-year-old right-hander improved to 14-5 with a 2.91 ERA, a 1.13 WHIP and a .225 opponent’s batting average.

Those are not the most important numbers associated with Strasburg, though. Neither are his 173 strikeouts and 115 hits allowed. The most critical statistic attached to Washington’s ace is 139.1. That is how many innings he has pitched.

Strasburg underwent Tommy John surgery last year after throwing 44.1 innings, including 24 innings and five starts for the Nationals. MLB.com’s Bill Ladson reported that, according to a source, Strasburg will log no more than 180 innings this season.

After Wednesday’s start, that leaves him with around 40 frames remaining. Since the first overall pick of the 2009 draft out of San Diego State typically records six innings an outing, that means Washington will get approximately six or seven more starts from the fireballer.

Understandably, the prospect of closing shop on Strasburg before the playoffs arrive is drawing controversy in Washington D.C. and across Major League Baseball. The Nationals have a legitimate chance to reach and win the World Series with a rotation that features Strasburg, Gio Gonzalez and Zimmermann. Remove Strasburg from the mix and the Nationals are left with Gonzalez and Zimmermann, both of whom are quality arms, but neither of whom are overpowering.

As Stark pointed out, whether or not the Nationals made the right decision to shut down Strasburg will always be a subject of debate to which there is no definitive answer. What if the Nationals keep Strasburg on the mound, they win or lose the World Series and he ends up with chronic injuries (like Kerry Wood) that minimize his long-term impact? And what if he is shut down, the Nationals are eliminated in the playoffs, and he lands on the DL again anyway?

Regardless of the decision they make, the Nationals are taking a risk.

The Nationals have consulted with esteemed medical professionals, like Dr. Lewis Yocum (who is a prominent authority on Tommy John surgery). On ESPN’s “Outside the Lines”, Washington general manager Mike Rizzo mentioned that the team studied power pitchers of similar ages throughout baseball history and could not find one example of a guy who has tossed 44 innings one year and 200 frames the next following the procedure.

Sports medicine experts appear to think Washington is wise for being cautious about Strasburg. However, as Dodgers senior director of medical services and baseball injury data guru Stan Conte told Stark, 50 percent of all starting pitchers who have underwent Tommy John surgery eventually land on the DL again regardless of how their workload is handled.

It seems like an ideal compromise is limiting Strasburg to six innings or 100 pitches, employing a six-man rotation or even giving him a breather by skipping his turn in the rotation two to three consecutive times.

Stark interviewed a pitching coach who said, “I just don’t understand why someone isn’t saying, ‘Let’s start managing this different. Let’s go with a six-man rotation. Every fourth turn through the rotation, let’s skip his start so we can buy him those extra starts later in the year.’ That makes so much sense to me. I don’t understand this (approach) at all.”

Rizzo has said that the team has considered that, but on “Outside the Lines” he explained, “….Every injury expert that we have spoken to (says) the effect of shutting a pitcher down and then ramping him back up and having him throw a full go is much more dangerous than having him pitch through the season and shutting him down.”

There is some belief in baseball that teams baby their pitchers in this era of relievers who are specialists and the “quality start” that deems a pitcher who allows no more than three earned runs in at least six innings has delivered a solid outing.

If the Nationals were insistent on keeping Strasburg’s workload at 150 or 160 innings, then it would be easier to agree with their decision to shut him down since he is currently at 139.1 However, if they indeed are willing to let him throw 180 innings, which would almost take him to the end of the regular season, why not give him some post-season starts with the understanding that he will need at least four or five days between appearances? Strasburg generally throws six innings in an outing.

Why not take the same approach in the playoffs? It’s better to have his intimidating presence for six innings than none at all.

On paper, it appears that the Nationals could be a perennial power, making annual trips to the playoffs and winning multiple World Series rings. Longtime baseball fans know better. With the impressive trio of Strasburg, Gonzalez and Zimmermann pitching exceptionally well in the same season, Washington can parlay that into a World Series championship.

Babying the franchise’s prized arm by not letting him throw as much as 25 to 30 additional innings in October is a decision that makes no sense.