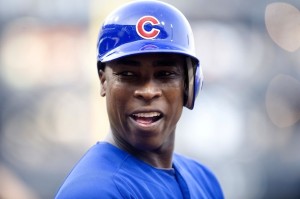 To the surprise of almost no one, Chicago Cubs outfielder Alfonso Soriano cleared waivers on Wednesday, and is now eligible to be dealt.

Soriano has privileges as a 10 and 5  player, and would have the final say on where he is traded, much like former teammate Ryan Dempster had. Soriano is hitting .264 with 21 home runs and 71 RBI this season

Soriano has an $18 million salary and a contract that runs through 2014, and ultimately whether or not he is dealt will be dependent on how much of that salary the Cubs are willing to pay. One source suggested before the deadline the Cubs offered at least one team to pay Soriano’s $18-million salary down to $3 million, which makes him a relative bargain for that kind of production.

With the suspension of San Francisco Giants outfielder Melky Cabrera , it would seem Soriano would fit perfectly in San Francisco. However, Soriano is on record as saying that he doesn’t want to play in San Francisco, but left the door slightly cracked to reconsider his decision.

“I don’t think so,” Soriano told Paul Sullivan of the Chicago Tribune when asked if he’d waive his no-trade clause for the Giants now. “San Francisco is not good weather to play in. It’s on the West Coast and I’ve never played on the West Coast. We’ll see what happens if they call. I’ll talk to my family then and see. It’s not my call. i know it’s 50 percent of my call, but it’s my family’s (call) too. I’d talk to my family and see what happens.” The Cove

This much is clear. The Cubs are looking to stockpile prospects and are willing to be very flexible and accommodating in making a deal. The team has moved starting pitchers Ryan Dempster and Paul Maholm, outfielder Reed Johnson and catcher Geovany Soto. Were it not for injury, Matt Garza would be pitching elsewhere.

The Cubs recently called up prospects Brett Jackson and Josh Vitters, and Anthony Rizzo who was called up in June has established himself as the  everyday first baseman.  Trading Soriano would clean the shelves of veterans for the Cubs, except for Garza, who would likely be dealt this winter.

The fact that Soriano can be traded, doesn’t mean he will be traded, but as each day passes, the Cubs lose a little more leverage. The best fit for Soriano at this point seems to be the Giants, but someone is going to have to convince him and his family to make the move.