Red Sox Fans are Fed Up with Drama and Dysfunction

I’m fed up with almost everything about Boston Red Sox baseball in 2012.

As a professional baseball writer whose passion for the game started as a 7-year-old in the mid-’70s, most of the features I author are objective, but this is not one of those columns. The Red Sox, a team I have devotedly loved year after year through all the exhilarating highs and heartwrenching lows, are in chaos.

The reason for my aggravation is not solely related to the team’s 57-61 record. Covering and following a sub-.500 ballclub is not fun, but it is inevitable in professional sports. Even a franchise with deep pockets is going to struggle now and then. Division titles, playoff berths and World Series championships are not won on paper. If so, the New York Yankees would own more than 100 World Series rings instead of 27.

Keep in mind that I’m not happy about where the Red Sox currently reside in the American League East standings – 57-61, fourth place and 13.5 games behind the Yankees. Yet it is not the losing that pushed me to a level of extreme disgust with the team. 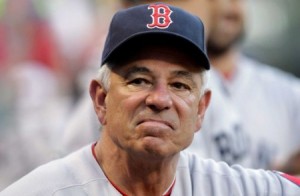 The organization needs to cut ties with Valentine

I’m fed up with Bobby Valentine, who invites turmoil with his ill-advised comments to the media and his inability to get along with his players and coaches.

I’m fed up with apathetic – and pathetic – players like Josh Beckett and Jon Lester, who have flopped on the mound and demonstrate little concern about their woeful performances.

I’m fed up with the lack of leadership from core players like Adrian Gonzalez and Dustin Pedroia, who have underperformed on the field and have been in the forefront of media firestorms this year.

I’m fed up with the majority owner John Henry, who seems more interested in his English soccer team and sending ridiculous e-mail responses to the media defending Valentine instead of stepping to the forefront and taking a more active role in fixing the myriad of problems plaguing the club’s leadership.

I’m fed up with Larry Lucchino, who for some reason is still in charge of running the team though he could not get along with Theo Epstein and is the person most responsible for bringing in and keeping Valentine.

Most of all, I’m fed up with the lack of accountability with the Red Sox as a whole. Valentine, Henry, Lucchino and several names that compose the current cast of players are responsible for transforming the club from a proud perennial World Series contender that plays the game the right way into an unwanted reality show that is spiraling more out of control as the days pass.

The only person for whom I have sympathy is first-year general manager Ben Cherington, a well-respected baseball mind who has not been given the freedom to showcase his abilities.

Sure, he made the trade that sent Josh Reddick to Oakland for projected closer Andrew Bailey. While Reddick has slugged 25 home runs for the A’s, Bailey has logged one-third of an inning with the Red Sox because of thumb surgery in spring training that kept him sidelined for most of the year. Of course, it is too early to determine who will inevitably get the best of the deal because Bailey is an elite closer when healthy.

Aside from that trade, Cherington has made an array of moves that has bolstered Boston’s depth – like getting hard-throwing relievers Chris Carpenter and Aaron Kurcz as compensation for Epstein departing for the Cubs, signing veteran Mark Prior (who is pitching well at Triple-A Pawtucket), acquiring useful left-handed reliever Craig Breslow and signing valuable 2012 contributors like outfielder Cody Ross and infielder Pedro Ciriaco.

Cherington can’t help that 25 players have landed on the DL this year, including important names like Jacoby Ellsbury, Carl Crawford, David Ortiz, rookie third baseman Will Middlebrooks and Bailey. It was not Cherington’s fault that Kevin Youkilis remained saddled with injuries, was not productive when he was off the DL and squabbled with Valentine. It is not Cherington’s fault that Valentine is even managing the Red Sox. He wanted Dale Sveum, who met with the so-called braintrust of Henry, Lucchino and Tom Werner. The ownership group overruled Cherington and passed on Sveum, who was then named manager of the Cubs.

Cherington deserves an opportunity to get the reigns and implement his vision, which includes staying away from costly long-term deals, building through the draft and international free agent signings, acquiring young veterans through trades and only using free agency to fill complementary roles (like Cody Ross).

What would be best for the team is for Lucchino to step down as president and CEO of the Red Sox, and for Henry and company to sell the team to a group that will solely focus on baseball and not combine its interest in the Sox with a NASCAR racing team, an English soccer club and Lebron James.

The latter is not likely to happen anytime soon, but there is speculation that Lucchino has yet to sign an extension with the Red Sox, so perhaps the post-Lucchino era can make its welcomed debut this off-season. It is Lucchino who wanted Valentine, and it is Lucchino who refuses to put an end to the circus and part ways with the embattled manager right now. Instead, Lucchino appeared on a Boston sports talk radio station and blamed injuries and the media for the team’s problems.

This is not Baseball. This is Reality TV 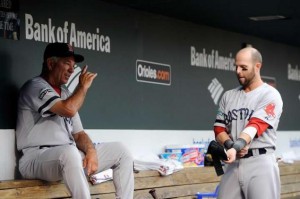 Undoubtedly, injuries have played a significant part in Boston’s 57-61 record, but DL stints have nothing to do with the dysfunction that runs from the front office all the way to the dugout. Valentine has not thrown a pitch or left runners in scoring position at the plate in key moments of games, but his presence fuels controversy and tension, even when he doesn’t open his mouth.

Though the Boston sports media is notorious for sensationalism and creating stories even when they don’t exist, it is obvious that few players like Valentine, and when a manager does not have the respect of his players, that leads to dissension in this era of $20 million annual salaries.

The Red Sox tuned out the likable Terry Francona during last September’s monumental collapse, yet the team needs a return to a “player’s manager” who is not prone to creating drama and distractions that clearly impact the team’s on-field performance.

Because of the rampant dysfunction, the Red Sox are deservedly the laughingstock of baseball. On the field, they show little fire when they get behind, which happens often with a lack of consistently good starting pitching. Before and after every game, players, coaches and Valentine answer questions about the latest controversy. Excuses, finger pointing and a lack of accountability define the team’s current state.

Even with all the negativity that surrounds the franchise like a thick New England harbor fog, the Red Sox are a team that can contend for the World Series next season. The roster has a core of talented veterans in their prime (Gonzalez, Pedroia, Ellsbury and Crawford), young players who will be ready to make a significant contribution in 2013 (Middlebrooks, utility man Ciriaco, catcher Ryan Lavarnway, shortstop Jose Iglesias and outfielder Ryan Kalish), and high ceiling prospects on the fast track to Fenway (like Xander Bogaerts, Jackie Bradley and Bryce Brentz).

Though the starting pitching has been disappointing this season, the team does have four starters who are under 30 that should be part of next year’s rotation in Lester (who is best suited as a No. 3 starter), Clay Buchholz, 24-year-old left-hander Felix Doubront and 26-year-old left-hander Franklin Morales (who is showing signs of why Baseball America named him the eighth best prospect in the game entering the 2008 season).

What the Red Sox must do to improve their culture, and upgrade their rotation, is part ways with Beckett and John Lackey (who is recovering from Tommy John surgery). Sure, it will require eating a bulk of their remaining salaries, but to escape the negativity that has enveloped the club since last September, certain players must go, and Beckett and Lackey are atop the list.

Since the Red Sox have promising arms but not a clear-cut ace, it will be surprising if they do not make a blockbuster trade in the off-season to land a top of the rotation presence. That might require parting with a Lester and/or a Doubront along with high-ceiling prospects not named Bogaerts and Bradley, but the team desperately needs a go-to starter.

Most importantly, the organization needs to cut ties with Valentine and Lucchino. It would also be ideal to get a completely clean slate and dismiss the entire coaching staff, including the guys Valentine brought in (Jerry Royster, Alex Ochoa and Randy Niemann), Francona holdovers (Tim Bogar, Dave Magadan and Gary Tuck) plus pitching coach Bob McClure.

The Red Sox need a fresh start because even the most ardent fan is finding it difficult to watch this team because of the dysfunction. This is not baseball. This is reality TV, and that does not work in Red Sox Nation. For the first time in my life, Red Sox baseball is not fun. Few players are likable, the ownership group seems disinterested, and the chief executive and manager have the reputation of circus clowns because of their antics.

Like most Red Sox fans, I have reached a point where I am exclaiming, “Please make it stop!”