Starting pitching, it is said, is the key to building a contender in Major League Baseball. That is true, but equally important is a catcher who has proficient defensive abilities and savvy game-calling skills.

Many Major League teams are scrambling to find one reliable backstop. The fortunate ballclubs – like San Francisco (Buster Posey), Baltimore (with Matt Wieters), St. Louis (Yadier Molina), Philadelphia (Carlos Ruiz) and the Chicago White Sox (A.J. Pierzynski) – have seen consistent production at the plate and behind the plate from their signal callers for multiple seasons.

A new crop of promising catchers is ascending farm systems across the majors. Here are five of the best catching prospects in baseball: 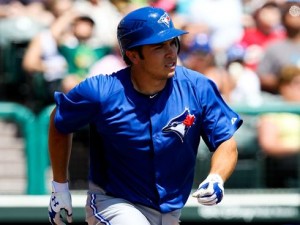 Right-handed starting pitcher Kyle Drabek is out for the season while recovering from his second Tommy John surgery and outfielder Michael Taylor has yet to realize his potential (and is now playing in the A’s organization), but the 23-year-old d’Arnaud has such a high ceiling that he alone could make the December 2009 trade of Roy Halladay to the Phillies worthwhile long term for the Blue Jays.

Currently, d’Arnaud is rated as the 19th best prospect in baseball by MLB.com while Baseball America placed him at No. 19 on its 2012 Mid-Season Top 50 Prospects List. If he didn’t tear his posterior cruciate ligament while sliding into second base during a game for Triple-A Las Vegas, he would have likely made his Major League debut this year.

Instead, Blue Jays general manager Alex Anthopolous said d’Arnaud will probably miss the rest of the season. He batted .333 with 16 home runs, 52 RBI and a .975 OPS in 303 plate appearances. If d’Arnaud is deemed Major League ready in 2013, the Blue Jays could trade J.P. Arencibia. 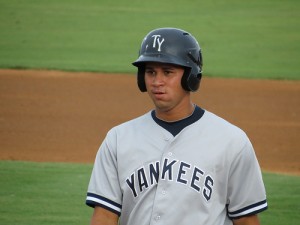 One reason the Yankees felt comfortable trading Jesus Montero to the Mariners last off-season for starting pitcher Michael Pineda is the presence of Sanchez in their farm system.

The 19-year-old Dominican Republic native was No. 30 on the Baseball America 2012 Mid-Season Top 50 Prospects List and is currently No. 42 on MLB.com prospect rankings.

Like Montero, Sanchez has defensive shortcomings, but he has a productive right-handed bat. He hit .297 with 13 home runs and 57 RBI at low Single-A Charleston this year before earning a promotion to high Single-A Tampa, where he has a .288 average and a .795 OPS in 130 plate appearances. 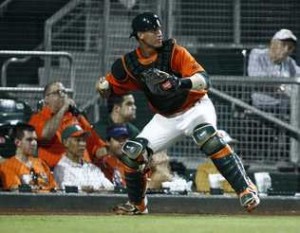 The Cincinnati Reds were well-stocked at catcher with the 23-year-old Grandal and fellow young backstop Devin Mesoraco in their system.

They opted to keep Mesoraco and include Grandal in the off-season trade that yielded starting pitcher Mat Latos. San Diego received Grandal, first base prospect Yonder Alonso, highly regarded minor league pitcher Brad Boxberger and Major League pitcher Edinson Volquez, so it was also a good harvest for the Padres.

A first round pick (12th overall) in the 2010 draft, Grandal is a switch-hitter with a strong arm behind the plate.

The Cuba native landed on the disabled list on July 31 with a strained right oblique muscle, an injury that happened during a swing on July 30 against the Reds. 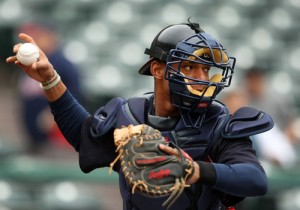 An international free agent signed out of Panama in 2008, the 20-year-old Bethancourt is regarded as the fourth best catching prospect in baseball by MLB.com.

Recently placed on the DL with a fractured left hand, Bethancourt has struggled at the plate this season as one of the younger players in the Double-A Southern League. He has a .243 average with two home runs, 26 RBI and a .566 OPS in 288 plate appearances at Mississippi.

Those numbers are far from impressive, but scouts praised his defense and his bat in last year’s Arizona Fall League and consider Betancourt a formidable prospect for the Braves, who currently have a decent backstop at the Major League level in Brian McCann. 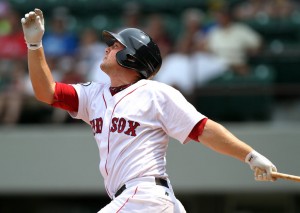 When the 25-year-old Lavarnway was drafted in the eighth round out of Yale in 2008, his catching skills were raw, but the Sox liked his work ethic and his bat.

He has made tremendous strides with his defense and game calling, and recently Baseball America named his the best defensive catcher in the International League (based on a poll of IL managers).

With the Red Sox fading from post-season contention, the right-handed hitter will get regular playing time against left-handed starting pitchers since switch-hitting catcher Jarrod Saltalamacchia is stronger as a left-handed hitter.

State of Alaska Department of Revenue Has $6.76 Million Stake in Marriott International, Inc.