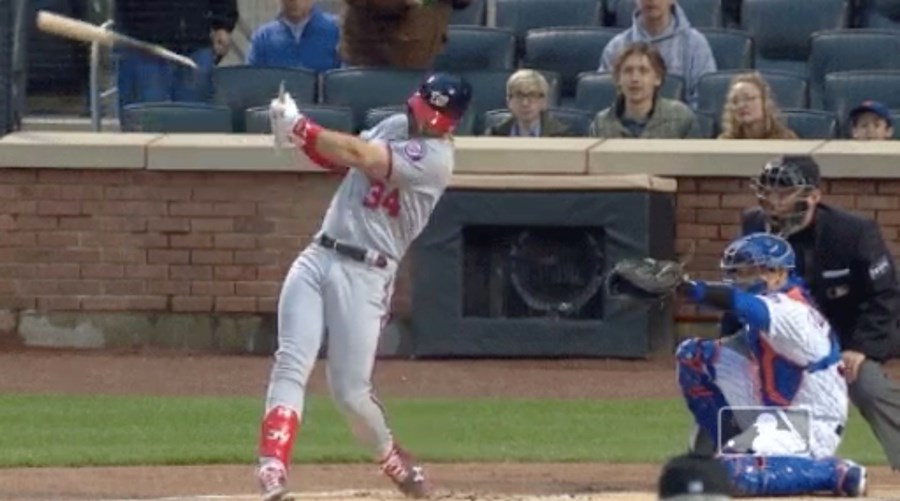 Bryce Harper showed the world of baseball just how much power he really has. The slugger for the Washington Nationals shattered his bat in two, yet managed to hit the ball over the fence for a home run on Monday. The Nationals beat the New York Mets 8-6 in the game.

Harper’s home run was his eighth of the season, which leads the majors, but his 31 ½-ounce, 33 ½-inch bat did not fare well in the process as it split cleaning into two pieces, and the ball flew what was estimated to be 406 feet at Citi Field.

The bat split at a point just above Harper’s hands, and flew up into the protective netting high up behind home plate on the infield’s first base side. While holding onto the small piece of the bat that remained in is hands, Harper jogged to first on his way around the bases.

The contact made by Harper was on a 95-mph fastball thrown by Mets starting pitcher Jacob deGrom, who said it was quite surprising as he first heard the bat break then looked and saw his outfielder keep running back toward the wall until he ran out of room and the ball landed in the outfield seats for a home run.

While walking back toward the dugout, Harper could be seen playfully flexing his biceps after pulling up the sleeve of his shirt. His manager, Dave Martinez, told Harper that yes he was strong.

Harper, who is just 25 but playing in his seventh MLB season, has 158 career homers. He told reporters following the game that none of his previous 157 home runs were anything like the one he hit on Monday.

Harper’s Washington teammates marveled at how Harper could do what he did, with Trea Turner saying that the rumor was the bat was broken prior to Harper entering the batter’s box, which would then make Harper’s home run all the more impressive.