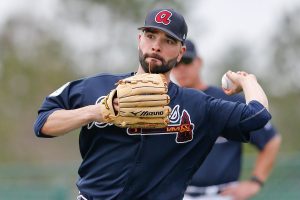 The MLB trade deadline is still all that anybody can talk about, and that isn’t a bad thing. After all, the futures of a lot of athletes are being decided. And it is difficult to deny the fact that the MLB Trade Deadline affects online betting odds.

The players usually bear the brunt of the resulting instability. Just look at Jamie Garcia who spent a week as a member of three separate clubs. How does that happen? Well, it all began when Jamie went to the Minnesota Twins in Oakland after a trade with the Atlanta Braves.

It only took four days for the veteran left-handed pitcher to make his first start for the Twins. And that should have cemented his place on the team. But then something strange happened. Jamie went back to Atlanta to collect his belongings.

He was supposed to re-connect with Minnesota after they finished their West Coast trip. However, Jamie ended up with the New York Yankees in a detour that saw the Twins acquire two minor league pitchers. The deal, which was completed Saturday, left a few people scratching their heads. And if you went looking for Jamie Garcia today, it wouldn’t be so surprising to learn that he has made another drastic move.

Oakland would have been a conducive environment for the athlete to prosper. And it isn’t like he is the only one whose career kept taking unexpected swerves. Everyone seems to have their sights set on Sonny Gray who will spend the next couple of seasons under team control.

The decision to move his start from Sunday to Monday after the non-waiver trade deadline actually worked to boost his value. There are also many a desperate team looking to add Yu Darvish, Zach Britton and even Justin Wilson to their ranks, especially seeing as they will soon become free agents.

If the Yankees have their way, Jamie could soon be trading advice with Sonny. New York hasn’t been shy about expressing its desire to acquire Sonny. Sonny, to his credit, hasn’t allowed all the trade rumors to derail his game. Even though he should be recovering from a shoulder injury, Sonny is as consistent as ever.

Because he has been around the MLB for so long, Sonny knows that paying the trade rumors heed doesn’t do him any good. He can only keep playing and waiting for the final decisions to be made.

Looking at the way teams handle the trade deadline can tell you volumes about the strategies they have in mind for the coming season. Everyone thought that the Twins would focus on rebuilding. However, despite losing a record number of games, they ended up at the top of the American League Central.

The way they flipped Jamie Garcia shows that their strategy is constantly changing. That is an intelligent approach. The Twins are watching what everyone else is doing and they are reacting accordingly.

The short term moves they are making might be a little discomforting for some of the players involved but the instability will be worth it if the Twins make the progress they are seeking.