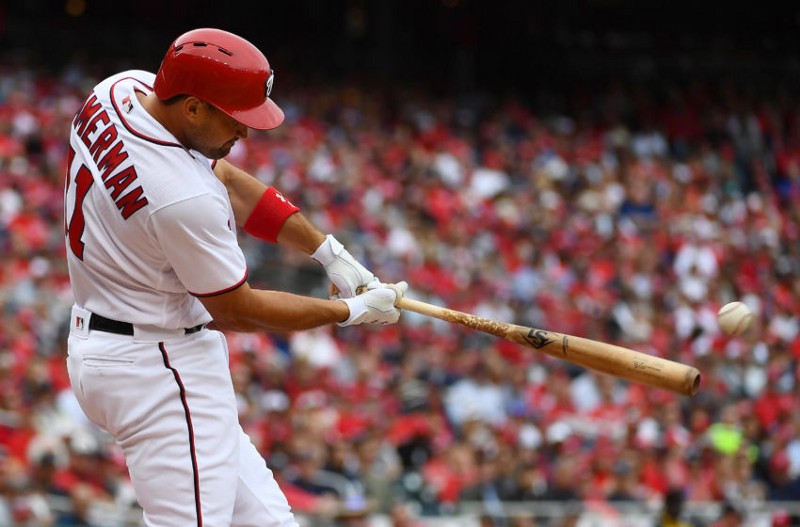 Ryan Zimmerman has returned bad back or not. Zimmerman had missed three straight games and four of the last five the Washington Nationals have played after hurting his back last week in Los Angeles.

However, he returned to the Nationals’ lineup and appeared as if he had not missed a beat after smacking two home runs and leading the team to a 10-5 victory over the Atlanta Braves.

He hit one home run 425 feet and another 439 feet and added a single as well during the seventh making it the 10th time this season he has had three hits in one game, which tops the majors and is seven more games than what he did all of last year.

Zimmerman’s offensive outburst put an end to Washington’s four-game losing streak, which saw their lead in the National League East whittled down to only 3 games.

However, Zimmerman’s bat, the rest of the Nationals’ powerful offense and its bullpen with three innings of scoreless relief were the keys for the NL East leaders to end their skid at just four games.

Following the game, Zimmerman said that every team will go through losing streaks, but ending them quicker than other teams helps separate good teams from bad.

Bryce Harper Washington’s No. 3 hitter had 2 RBIs on Tuesday and has returned to play like he did in 2015 when he was the MVP.

Daniel Murphy the No. 5 hitter, who finished last season in second place for the MVP, had three hits Tuesday and is back to a pace of nearly duplicating his offensive numbers from a season ago.

After Zimmerman’s outburst against Atlanta on Tuesday, his batting average increased to .372, which is tops in the majors.

Zimmerman’s two home runs gave him 19 for the season, which also is No. 1 in the NL and four more than he hit the entire season last year.

Zimmerman now has 234 career home runs which ties him for first place for the franchise with Vladimir Guerrero. The former first round draft pick from Virginia, was the Nationals’ first draft pick as a franchise in 2005.

Players, coaches and fans have seen the change in Zimmerman at the plate from last season. Most say the change is that Zimmerman is healthy again and his manager Dusty Baker said he is just happy to have Zimmerman back to his normal self again.

The Middleby Co. Given Average Rating of “Moderate Buy” by Analysts