Posted by Christopher Moran on May 4th, 2015 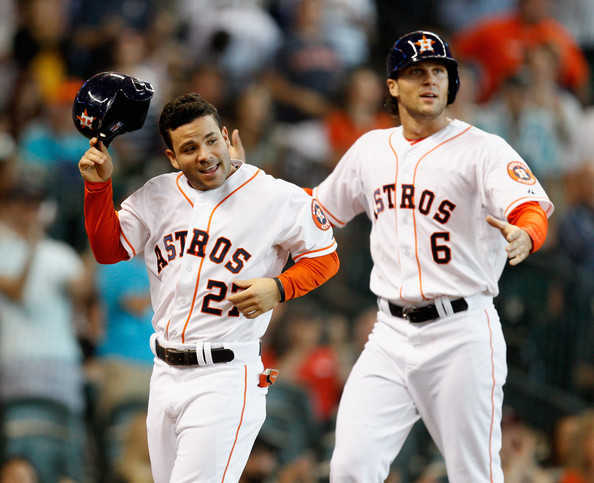 The Houston Astros own baseball’s second best record at 18-7. Only the St. Louis Cardinals, who own 18 wins against six losses, have a better mark. Houston enjoys a seven game lead on the Los Angeles Angels, who occupy second place in the American League West. Their odds of making the playoffs have surpassed the 50 percent mark and of the five teams in the West, they possess the best odds of winning the division.

The Astros group of position players currently ranks third in baseball in fWAR with +6. Last season Astros position players totaled just +10 fWAR. They have been led by second baseman Jose Altuve and Jake Marisnick. Altuve, who took home the batting crown last season, hasn’t slowed down. He owns a .361/.407/.509 slash line that is helped by a minuscule 8.4 percent strikeout rate.

Marisnick, who the Astros acquired in a trade with the Miami Marlins, is coming into his own. After hitting just three home runs in 65 games last season, the 24 year-old is hitting .382/.427/.632 with three home runs while playing strong outfield defense. His outfield mate, George Springer hasn’t quite hit his power stride yet, but has made some impressive plays in the outfield, including this grab. Altuve, Springer and Marisnick have each stolen nine bases. Offseason acquisitions Jed Lowrie and Luis Valbuena have both made solid contributions, with Lowrie being particularly impressive.

The Astros rotation contains some holes, and as a consequence, Asher Wojciechowski, Roberto Hernandez and Brad Peacock have all made starts. Dallas Keuchel and Collin McHugh are strong at the top of the rotation as both have indicated that their breakout 2014 campaigns weren’t just a fluke. Luke Gregerson, who was signed to a three-year deal this offseason, has served well as the Astros closer.

The Astros won’t play .720 baseball the rest of the season. At some point Dallas Keuchel will start giving up runs, and Marisnick won’t have a slugging percentage north of .600. However, even if the Astros are only a .500 team the rest of the season, they will be in the running for a playoff spot. Though it’s very early in the year, a seven game cushion is very significant. The Oakland Athletics, Seattle Mariners and Angels all have big question marks around their ballclubs. After six consecutive seasons of losing baseball, including consecutive seasons with 100 losses, it’s time to take the Astros seriously.