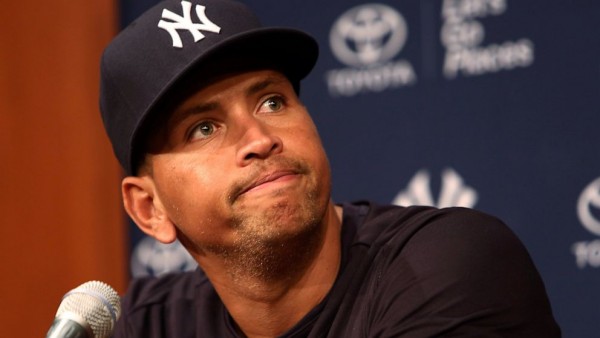 Reports on Monday indicated the New York Yankees were planning on suing its highest paid player in the event he had any modicum of success. Ladies and Gentleman, only Alex Rodriguez can create those headlines.

We live in a Yankees’ Universe where they don’t pick up the phone for an employee who was once considered the next “face” of the franchise, even if it’s allegedly just an apology. We follow a franchise where if Alex Rodriguez hits six home runs, there could be legal repercussions. There’s a team who owns a stadium in the Bronx and that team went out and bought a third baseman to replace its highest paid player. A player who, once upon a time, voluntarily moved to that position to begin with.

And you know what? The Yankees are doing everything right when it comes to Alex Rodriguez. A-Rod didn’t turn into Derek Jeter, who lead by example, stayed out of the spotlight and hit under it at the same time. He’s not CC Sabathia or Mark Teixeira, who are both overpaid, both in bad contracts, but neither one causes the team any issues off the field and neither one has been accused of tampering with their own brand on the field.

A-Rod is his own fire. He is the mountain and the molehill. Alex Rodriguez isn’t A-Rod, he’s “A-LightningRod” and we’ve determined it will never change.

But the Yankees have changed.

Instead of shelling out a potential $24 million in bonuses should A-Rod pass the final four players ahead of him on the home run list, New York finally put its golden foot down. In fact, with three of those guys out of realistic reach, the Yankees are willing to go to court for as little as a $6 million dollar argument.

Judge Judy would scoff at that if she saw how deep the pockets went in the Bronx.

But you know what? That’s how you get to him. That’s how you manage. That’s how you keep him caged away from the future core, whether it’s Jacoby Ellsbury, Brett Gardner, Masahiro Tanaka or Brian McCann. You make things petty and trivial, but also logical and finally fair.

It’s kind of like continuing to play despite the fact you’re so clearly finished just so you can continue collecting pay checks. It’s kind of like coming back for more even after you shame yourself over and over again because you’re addicted to records nobody will credit you with anyway. It’s along the lines of collecting a pay check you didn’t earn and not even being able to stay on the field to pretend to earn it at this point. The Yankees are playing by A-Rod’s rules and they’re finally winning.

We’ve determined Rodriguez will never learn. He is: Greek Tragedy, Science Fiction, Crime, Drama and a Super Hero Action movie all rolled into one, breaking down, scientifically engineered, body. He’s the flawed antagonist.

Biogenesis was the last chapter for the Yankees. A-Rod is dead to them now. Earlier in his contract and many millions of dollars ago, New York was married to Rodriguez and would have had to buy all new furniture while he took half if they divorced. Now? Rodriguez has no more leverage.

He’s a part-time player who can’t field and can’t hit right-handed pitching. He’s been out of the game for a year and he’s five years past his prime. The fans can see it in the statistics and the Yankees will only allow for it regardless.

His contract is mercifully three years from being a dark history lesson and a 30 for 30. The millions left on the payroll are dwindling by the day, soon to either disappear in court or to be left on the bench most nights. The Yankees have to do everything without any concern or care for Rodriguez and only in the past year have they begun to do that.

It’s the best thing for the franchise.

When A-Rod’s money was successfully kept off the books last year, they went out and bought an ace for the present and the future. When Rodriguez started saying how ready he was to come back, the Yankees brought Chase Headley back for four years.

Before, New York had no middle of the order bat, no third baseman and no backup plan. Now, Rodriguez himself, is nothing but a backup plan.

Rodriguez’s payroll dent will continue for another three years unless the Yankees can coax him into more illegal activity or can prove he’s chronically damaged, but the dark cloud over New York is becoming lighter by the month. Alex Rodriguez has to earn everything from here on out, regardless of his pay check. It’s the only form of revenge the Yankees can use and they are maximizing it, hoping it results in the troubled former All-Star breaking down into a buy-out of some sort or just becoming such an after thought he’s ignored as Brian Cashman continues to build the roster back into October form.

If Rodriguez comes back and gives the team something, anything, it will be a nice consolation price, or whatever comes after a bronze medal to an otherwise tarnished and questionable career. It will also benefit the Yankees. But with Jeter, Andy Pettitte, Jorge Posada and Mariano Rivera all gone and all of the bad contracts on the roster two to three years away from expiring, the Yankees are finally free of all of their past shackles and able to rebuild and get back into contention.

They still have one chain left, but at least they finally figured out how to manage living with it.