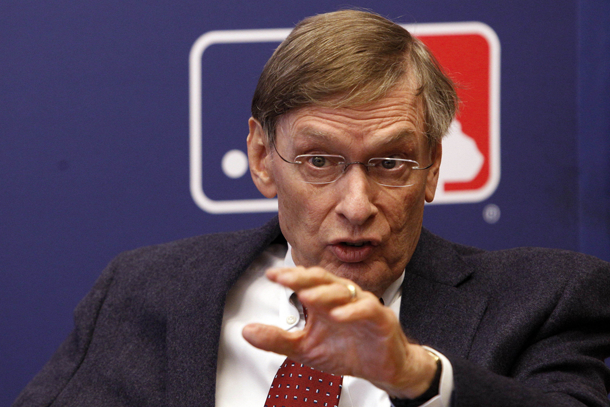 Today is the last day in the reign of the Commissioner of Baseball.  Like all leaders there are those that love him and those that hate him.  Believe me in the beginning of his tenure the easiest day in sports talk radio was to open the mike and say Bud Selig’s name then sit back and take hour after hour of calls from angry baseball fans screaming their hatred of the man who ran Major League Baseball.  His tenure started as shaky as it could possibly be.

He was supposed to find the next MLB commissioner and when the owner of the Brewers ended up with the job most fans cried foul that the owners put one of their own on the throne and he was there to do their bidding.  Years and years of labor unrest hurt the game and left fans with an awful taste in their mouth.

Not many gave Alan H. Selig a chance to turn this game around.  Well decades later I can say he left the game better than he found it, and now the historians can begin to take a look at his time running baseball and begin to pick it apart and judge him and how he guided America’s pastime.

There are many reasons to tear down Selig and there is tarnish on his legacy.  He over saw the game during one it’s most scandal ridden times, the STEROID ERA.  When the game was trying to get back on it’s feet after the canceling of the 1994 World Series our game was at a low point.  Cal Ripken brought people back in the excitement of his breaking Lou Gerig’s all time games played mark, but baseball didn’t feel the same.

Baseball got back on it’s feet with the great home run outbreaks soon after that, the trouble was we learned years later that outbreak was a symptom of an of steroids in our game.  Soon everyone was putting up numbers and records were soon shattered and it seemed everyone was hitting bombs.  But all those homers came at a price that will forever hang over the commissioners head.

The steroid era in baseball is a black mark that will forever stain the game just like the 1919 Black Sox, Pete Rose banishment, the cocaine trails of the 80’s and labor strikes and lockouts.  Selig’s critics can always point to Steroids, the canceling of the World Series, and the a tie in the All Star Game as his biggest letdowns of the great game of baseball.

For Selig’s buddies in the game, and there are a lot of them, he will be looked at as the man that took the red hot mess of baseball and brought it into the next century stronger than ever.  There is no argument that his legacy will include unprecedented growth in the game.

New teams in Florida and Arizona, new ballparks all over the country that bring in record crowds year after year.  He can claim a competitive balance that sees just about everyone having a chance to go to the playoffs every year.  His finger prints will be a mark on baseball for ever from new division alignments, two wild card teams, expanded playoffs, instant replay, interleage play, The World Baseball Classic, and labor peace.

When he came in the labor unrest was ready to tear the game apart.  Under his leadership the game is as healthy as it has ever been with the MLBPA and MLB in labor harmony.  Under Selig baseball came into the next century with a bang with MLB.com, MLB Network, MLB Network Radio/Sirius XM, and MLB at Bat app.

I used to have a transistor radio I used to listen to static filled games that would fade in and out as I tried to listen to the game.  Are you old enough to remember having to pull over to the side of the road to make sure you could hear the game on the car radio so you wouldn’t miss a big moment in the ball game.

In mr car, my Sirius XM radio brings me every game every day during the season.  If I tried to tell that story to my son he wouldn’t believe it.  Today I don’t have to wait for This Week in Baseball once a week.  Now I can watch a 24 hour day baseball channel when ever I want.  I can turn on my Sirius XM radio and talk baseball anytime I want.  I don’t have a little radio to listen to games, I have my Sirius XM app on my iPhone, or my MLB at Bat App I can watch games on my iPad in bed now.

As a kid I would grab the TV Guide as soon it hit the mailbox and look and see what baseball games were on TV that week.  Now I can watch games on my Xbox, my Apple TV, my lap top, and the list goes on and on.  Most nights I am on MLB Network Radio hosting MLB Roundtrip, I have up to eight games on at once between all my devices at one time in my home studio.

That is a lifetime away from a kid who jumped up and down when my parents got cable TV which meant I could watch WTBS to see the Braves, even if I didn’t like the them, but I didn’t care.  All I knew was I got more baseball.  Wow have times changed under Commissioner Bud Selig.

Years from now someone will write the definitive work on the reign of Bud Selig.  How history will judge him,we will see someday.  His legacy will be smudged by the Steroid Era, and will be hailed by the expanded playoffs, teams like the Royals going to the World Series in his last year in office, and new media like MLB.com.

I am not sure how history will judge him.  But if any of the historians want to ask me today on January 24th 2015, the day that he leaves the post of commissioner, I will tell them he did leave then when he found it.