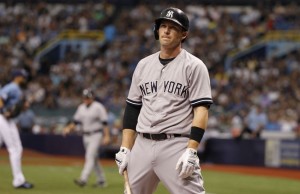 The New York Yankees re-signed 31-year-old, Stephen Drew, for a one year, $5 million dollar deal with potentially 1-2 million in incentives on Tuesday. Drew will be expected to play second base and provide insurance to Didi Gregorius at shortstop.

The veteran, Drew, hit a measly .162/.237 last season but missed part of the season before signing with a team and there have been rumors of alleged personal matters which may have contributed to his weak numbers. With the move, Brendan Ryan, the previous slick-fielding backup shortstop, would appear to be redundant. The Yankees will likely use Drew primarily at second base and Gregorius primarily at shortstop, forming one of the better defensive middle infields in the game, but Drew may find himself in a platoon with one of Rob Refsnyder or Jose Pirela, two rookies who hit .385/.447 and .319/.382 respectively against left-handed pitching last season.

Drew is a left-handed batter with Gold Glove caliber defense. One would expect he could hit better with a full season and against primarily right-handed pitching, but he could find himself playing full-time if Gregorius struggles mightily at the plate or Drew rediscovers his own 15 HR, .280 type of offensive ability.

The Yankees should be able to go with a nice mix of veteran and unproven talent out of Spring Training. Chase Headley, Mark Teixeira and Garrett Jones should see almost all of the corner infield playing time (with Alex Rodriguez mostly DH’ing) and Brian McCann and likely JR Murphy are due to play behind the plate. That leaves Gregorius, Drew and one of Pirela or Refsnyder for the bench, with Chris Young and Jones backing up the outfield.

In that event, New York is likely to go with Pirela, who is said to be a super utility player on defense, and let Refsnyder start in AAA and provide insurance for a shaky middle infield from an offensive standpoint. The Yankees are likely to part ways with Ryan, who is in a final year of a two-year deal.