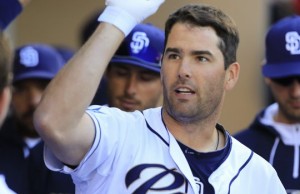 Smith was acquired from the Oakland Athletics last offseason in exchange for relief pitcher Luke Gregerson. He had a career year with the Padres in 2014, batting .266/.367/.440 in 136 games. In the seasons’s first half he had an even more impressive .283/.387/.508 slash line. San Diego rewarded him with a two year, $13 million contract extension in July.

The 24 year-old Maurer possesses rather dismal career numbers. In 159.2 career innings he owns a 5.58 ERA. But, the 6’5 right-hander possesses a fastball that reaches the upper 90s, and he was devastating out of the M’s bullpen last year. Over 37.1 innings as a reliever he carried a 2.17 ERA with 38 strikeouts and only five free passes.

It’s possible that the Padres will see if Maurer can carry his success in the pen to the rotation. After Andrew Cashner, Tyson Ross and Ian Kennedy there will be a lot of competition for the remaining two spots in the Padres rotation. If Maurer is unable to win a spot in the rotation, he should be a good option out of the pen. He’s the second reliever San Diego has added this week. Earlier they acquired Shawn Kelley from the New York Yankees.

The Padres have been intent on making over their roster. They have a surplus of relief pitchers on their roster, and Wil Myers has been popping up in trade talks as well. A.J. Preller has been busy, and there’s no reason to think that he’s done shopping.

Meanwhile, the Mariners have addressed their outfield issues this offseason. They signed Nelson Cruz to a four year pact, and acquired Ruggiano and Smith to man the other corner spot. Austin Jackson, who was traded for at the deadline last year, will play center. Those are significant upgrades from an outfield that featured Stefen Romero, Abraham Almonte, Endy Chavez and James Jones in 2014.