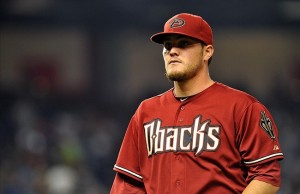 Miley, who was projected to serve as Arizona’s Opening Day starter, will join a rotation that also includes Joe Kelly and Clay Buchholz. The Red Sox are likely to pursue two additional starting pitchers. A supplemental first round selection (43rd overall) out of Southeastern Louisiana in 2008, Miley has shown durability in his first three full Major League seasons. He logged 194.2 innings and posted a 16-11 record, a 3.33 ERA and a 1.18 WHIP in 2012, when he was named a National League All-Star and finished second in National League Rookie of the Year voting. He has eclipsed 200 innings in the last two seasons, including an 8-12 record and a 4.34 ERA in 2014. Miley’s ERA was reportedly not helped by an atrocious Diamondbacks defense which lacked range.

The deal opens an additional 40-man roster spot for the Red Sox and clears the way for the myriad of high-ceiling starting pitching prospects to get a chance. Right-handers Matt Barnes and Anthony Ranaudo; and left-handers Henry Owens, Eduardo Rodriguez and Brian Johnson are slated to compose Triple-A Pawtucket’s Opening Day rotation if they all remain in the organization. All five are considered promising arms. Owens is the highest-rated pitching prospect in the Red Sox farm system and is a probable trade chip in discussions with Philadelphia for Cole Hamels, Cincinnati for Johnny Cueto or Washington for Jordan Zimmermann.

As for the Diamondbacks, they continue to stockpile young pitchers. Earlier this week, the club traded catcher Miguel Montero to the Chicago Cubs for right-handers Jeferson Mejia and Zack Godley. De La Rosa and Webster will compete for back of the rotation roles with Robbie Ray (who was recently obtained from Detroit in the three-team trade that sent shortstop Didi Gregorius to the New York Yankees), Trevor Cahill, Chase Anderson and Vidal Nuno. Josh Collmenter and Jeremy Hellickson (who was brought in earlier this offseason from Tampa Bay) are projected to anchor the rotation. Patrick Corbin and Bronson Arroyo are rehabbing from Tommy John surgery and could be ready after the All-Star break.