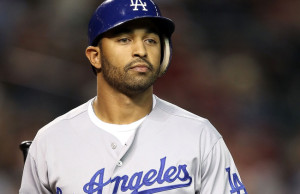 The San Diego Padres have acquired outfielder Matt Kemp from the Los Angeles Dodgers reports Jon Heyman of CBS Sports. As part of the deal, the Dodgers will eat $30 million of the $107 million remaining on Kemp’s contract, which runs through 2019. Catcher Tim Federowicz will accompany Kemp to San Diego while catcher Yasmani Grandal, righty Joe Wieland and pitching prospect Zach Eflin will go to Los Angeles. This is the latest in a flurry of activity for the Dodgers, who completed a six player trade with the Miami Marlins, have a deal for Jimmy Rollins in the works, and acquired second baseman Howie Kendrick from the Los Angeles Angels. In addition, they have a rumored four year deal with Brandon McCarthy.

Kemp was one of baseball’s best players in 2011. The big outfielder slugged 39 home runs and swiped 40 bases, falling just shy of the vaunted 40-40 club. Since then he’s struggled with injuries which have robbed him of his speed. In 2013 he played in just 73 games and hit a mere six home runs with a rather average .270/.328/.395 slash line. Overall, he was below replacement level thanks to poor outfield defense. He had something of a rebound year in 2014, at least from an offensive standpoint. The 30 year-old played in 150 games and smashed 25 home runs with a .287/.346/.506 batting line. His outfield defense graded terribly, and despite very good offensive numbers he had just +2 WAR.

Looking forward Kemp is a strong offensive player, and Steamer projects a .272/.339/.469 slash line which would round out to a 128 wRC+. But, he’s no longer able to play center field, and it’s unclear whether he can even man a corner spot. While he’s a formidable offensive force, he’s probably not much more than an average player, for which the Padres paid dearly.

The 26 year-old Grandal has struggled with injuries as well, and he’s played just 216 games in three seasons with the Padres. He had a strong debut year in 2012, batting .297/.394/.469 in 60 games and posting +2.5 WAR. Since then his offensive production has dropped from that lofty peak, though he did hit 15 home runs last year. All in all, Grandal is a strong hitter for a catcher, and he projects for a .237/.335/.389 slash line. Furthermore, he is an excellent pitch-framer, a skill that Dodgers front office man Andrew Friedman values highly from his days in Tampa Bay.

The other pieces in the deal appear to be of less consequence. Wieland, a 24 year-old right-hander, has pitched 39 major league innings since 2012. He’s had success in Triple-A, and might factor into the Dodgers bullpen plans. Eflin, the 33rd overall pick out of high school in 2012, showed some promise in High-A with the Padres and has a chance to stick as a starting pitcher. Federowicz has served as the Dodgers backup catcher. In parts of four seasons he owns a .194/.247/.300 batting line.

After an offseason that had quiet up to this point, the Dodgers have engaged in a flurry of moves. It appears that their new front office is intent on overhauling the roster.