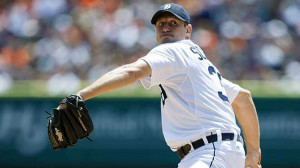 Max Scherzer is the prize of the free agent market. The right-hander is likely to secure the biggest contract awarded this offseason. He turned down a big contract extension offer by the Detroit Tigers and after having another excellent year on the mound, he’s going to turn out a winner on that gamble.

The 30 year-old Scherzer has spent the last five seasons with the Tigers after being acquired in a trade with the Arizona Diamondbacks. In those five seasons, he’s produced 22.9 fWAR, which ranks 6th in the major leagues. Scherzer has been particularly strong in the last three years.

In 2012 Scherzer’s strikeout rate rocketed up from 20.9 percent to 29.4 percent. His ERA dipped all the way from 4.43 to 3.74, and his FIP and xFIP were an even more impressive 3.27 and 3.23, respectively. Scherzer used the same pitch mix as in past seasons, but he bumped his fastball velocity up to 94.2 miles per hour, an increase of nearly one full mile per hour.

The next season his strikeout and walk rates remained essentially the same, but opponents managed just a .259 in-play batting average, compared to .333 the prior year. As a consequence, Scherzer’s ERA plummeted to 2.90. He took home the Cy Young award and earned 21 victories as well.

The big right-hander nearly replicated his 2013 success in 2014. He authored strikeout and walk rates of 27.9 percent and 7.0 percent, respectively. His ERA rose to 3.15, thanks to an in-play batting average of .315. His FIP and xFIP were almost identical to his numbers from 2013.

Over the last three seasons, only Yu Darvish has a higher strikeout rate than Scherzer’s 28.6 percent rate. His K-BB rate of 21.5 percent is only a tick behind Clayton Kershaw‘s 21.5 percent mark. Even with the Tigers less than stellar defense behind him, opposing hitters have batted just .226 against Scherzer. He’s now gone six consecutive seasons of at least 30 starts.

Only the big money teams will have a shot at Scherzer. The Boston Red Sox will be looking for pitching, as Clay Buchholz is the only remaining hurler from last year’s Opening Day rotation. The New York Yankees and Los Angeles Dodgers can never be counted out with regards to big-name free agents.

While the Los Angeles Angels have big money committed to Albert Pujols, Josh Hamilton and C.J. Wilson, it’s hard to imagine them passing up an opportunity to make a run at a top notch starting pitcher. Also, it seems inevitable that the Chicago Cubs will sign Scherzer, Jon Lester or James Shields. They have cash aplenty, and look like they are not far from contending.

Wherever he goes, Scherzer is sure to get a lot of money. A deal for seven years and $175 million is an appropriate baseline.