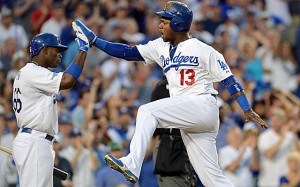 Los Angeles Dodgers shortstop Hanley Ramirez will be heavily sought after this offseason. Though he’s been injury-prone, Ramirez has been a very productive player while on the field. He’ll turn 31 in December and may not be best suited for shortstop anymore, but Ramirez has expressed a willingness to play third base, a position he occupied in 2012.

Ramirez burst onto the scene as a 22 year-old with the then Florida Marlins in 2006. He quickly established himself as one of the top players in baseball. In his first four major league seasons, only Albert Pujols and Chase Utley accumulated more fWAR. The young shortstop would have another solid year in 2010, though it was a drop off from his lofty standards.

In 2011, Ramirez appeared in just 97 games, and had a poor .243/.333/.379 batting line. He hit only 10 home runs after ripping at least 20 in each of the past four years and produced just 1.0 fWAR. The next season Ramirez would be moved to third base as the Miami Marlins signed Jose Reyes to play shortstop. Ramirez’ play was uninspiring, and the Marlins decided to blow things up. They traded him to the Dodgers, who positioned him at third.

Overall, Ramirez hit .257/.322/.437 in 2012, and played in 157 games. His 2.9 fWAR was decent, but it seemed that his peak years of 2006-10 were a thing of the past. While injuries limited Ramirez to just 86 games in 2013, he was the best player in baseball when he was on the field. The Dodgers moved him back to shortstop after the failed Dee Gordon experiment, and he handled the position adequately. More importantly, he had a monster year at the plate.

Ramirez smashed 20 home runs, and batted an impressive .345/.402/.638. That rounds out to an incredible 191 wRC+, which would have put him on par with Miguel Cabrera. Despite the limited playing time, he had 5.0 fWAR. Injuries would hamper Ramirez again in 2014, and this time he played just 128 games. His numbers while on the field were less shocking, but still strong, though his shortstop defense was subpar. Hanley hit just 13 home runs, but also ripped 35 doubles, and managed a .283/.369/.448 slash line for a 135 wRC+.

Going into this offseason, Ramirez is the prime position player on the market. He’s poised to command a large contract, probably in the range of seven years and $140 million. Several teams will be interested in him. The Dodgers are of course flush with cash, and would like to bring him back. When big money is involved, the New York Yankees can never be counted out, and neither can the Boston Red Sox.

A very interesting possibility, and one that has been suggested elsewhere, involves the Colorado Rockies sending away Troy Tulowitzki and then signing Ramirez. A move like that would be a longshot, but the Rockies would be flush with cash after giving away Tulo’s contract, and they’re used to injury-prone, slugging shortstops. That might not happen, but it would be one of the biggest moves of recent offseasons.