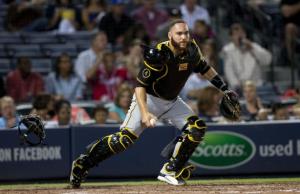 The Pittsburgh Pirates tagged catcher Russell Martin with a qualifying offer this Monday, which he is likely to decline. The 31 year-old catcher has the option of accepting a one-year contract with the Pirates for $15.3 million, but it’s more likely that he will test free agency. After a career year at the plate, it’s likely that Martin can find a multi-year deal.

The Pirates signed Martin to a two year deal worth $15 million in the 2012 offseason. Martin was coming off two seasons with the New York Yankees where he provided some home run pop but less than stellar offense. His deal with the Pirates turned out to be a huge bargain.

Martin’s 2013 campaign wasn’t eye-popping, at least from an offensive standpoint. He hit .226/.327/.377 with 15 home runs, which comes out to a 102 wRC+. More importantly, he threw out 36 baserunners and rated as one of the best pitch-framers in baseball. While the traditional batting numbers weren’t great, his defensive presence was invaluable to the Pirates, and he helped propel them to their first playoff berth in over 20 years.

Martin missed a big chunk of the season in 2014. His 111 games played were his fewest since the 2010 season with the Los Angeles Dodgers. While he didn’t receive enough plate appearances to qualify, he was just one of four players in baseball that recorded an on-base percentage of greater than .400. His .290/.402/.430 slash line was his best since the 2007 when offense was much more prevalent.

The Pirates‘ backstop posted a 140 wRC+, which would have ranked 17th in baseball, right alonside Freddie Freeman and just a shade behind Buster Posey. He threw out 37 baserunners and rated very highly on StatCorner‘s catcher framing list. All in all it was a career year for Martin, who posted 5.3 fWAR. That’s only a few decimal points behind Posey, who received nearly 150 more plate appearances.

Looking forward it’s unlikely that he’ll continue to produce at this level. Even with significant regression, Martin is still an above-average offensive catcher. His Steamer projection is a .240/.341/.392 line. That pales in comparison with his 2014 slash line, but it amounts to a 109 wRC+. With his defense, that’s translates to +3 fWAR.

Going into this offseason Martin is sure to attract plenty of interest, even if he is an older catcher. The Chicago Cubs could be looking to upgrade from Wellington Castillo, and they’ll have money to spend. Likewise, the Toronto Blue Jays and the Los Angeles Dodgers, Martin’s original team, should be in the running. Draft pick compensation will deflate his market some, but there aren’t any other starting catchers available in the free agent market.

Martin will hit payday. Don’t be surprised if he gets something in the range of $12-15 million per year over 4-5 years.