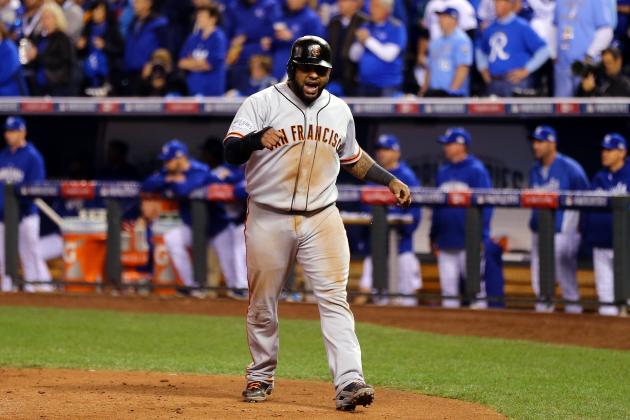 The San Francisco Giants are fresh off winning their third World Series title in five years. Third baseman Pablo Sandoval played an integral part in the Giants’ playoff run. He collected 26 hits, which set a new postseason record. Sandoval notched 20 of those hits between the NLCS and Fall Classic, batting a combined .417/.472/.542 with six doubles. He’s a free agent this offseason, and at the age of 28, he should have several good years left.

Despite missing a good chunk of the 2011 season with an injury, Sandoval was one of the best player’s in baseball. He played excellent defense at the hot corner and smashed the ball to the tune of a .315/.357/.552 line, accumulating 23 home runs and 5.5 fWAR in only 117 games. Sandoval’s performance has settled in a more consistent range over the last three years. He’s hit about 10 to 20 percent better than the MLB average, and played good defense at third base, putting him right around +3 fWAR each year.

There’s no question Sandoval is an unorthodox player. He consistently posts one of the highest swing rates on pitches outside of the strike zone, yet also managed excellent contact rates along with respectable walk rates. Despite his weight struggles, he’s a good defender with agility that belies his round frame.

Sandoval’s weight issues might scare some teams away. Whether it’s fair or not, his poor 2010 season and injury-plagued 2012 season are often attributed to trouble controlling his weight. He’s never going to be small, but he’s been a very productive major league player while sitting around 240 pounds or more. For a free agent he’s relatively young, and should have solid years ahead of him.

Steamer currently is projecting a .281/.337/.451 slash line for Sandoval in 2015. Along with decent defense that comes out to nearly +4 fWAR. Expect plenty of teams to be interested in Sandoval. The Giants will struggle to replace him if he goes elsewhere, as they don’t have a strong in-house candidate to take his spot.

The Boston Red Sox would be a good fit for the Panda. They’re committed to using Xander Bogaerts at shortstop, and Will Middlebrooks might be on his way out after poor performance and injuries have derailed his last two seasons. There’s a need, and the Sox won’t be shy about spending this offseason. Likewise, the Yankees will be interested.

Chase Headley played well for them down the stretch after they nabbed him from the San Diego Padres, but he too is a free agent. Headley is a couple years older and not as accomplished with the bat, so he likely won’t get a deal of more than 4-5 years.

Don’t be surprised to see Sandoval get 5-6 years of at least $15 million and probably closer to $20 million per year. To the victor go the spoils, and Sandoval’s postseason performance certainly didn’t hurt his case.