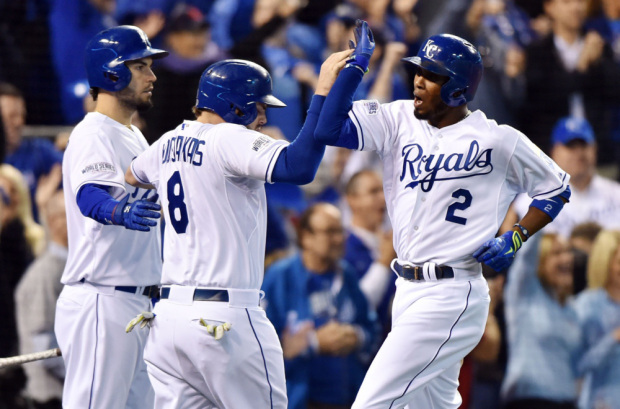 After having dropped two consecutive games to the San Francisco Giants, the Kansas City Royals were facing elimination Tuesday night. Their offense responded by racking up 10 runs in a shutout victory. The series will continues as Game 7 takes place Wednesday night at Kauffman Stadium.

Seven of the Royals runs were plated in the second inning as Jake Peavy was knocked from the game. The big blow came from Lorenzo Cain who hit a two-out, bases loaded single off reliever Yusmeiro Petit that brought in two and expanded the Royals lead to 4-1. Eric Hosmer followed with a two-run double and Billy Butler ripped a double as well to close the scoring.

From there the Royals coasted to victory. Cain recorded two hits, including one of the Royals six doubles. He also walked twice. In the World Series he’s hitting .318/.423/.409. Overall in the postseason the Royals speedy outfielder has compiled a .339/.397/.429 batting line. Mike Moustakas had two hits as well including his first home run of the series. After looking lost at the plate for most of the postseason, catcher Salvador Perez is batting .381/.381/.571.

Starting pitcher Yordano Ventura wasn’t at his sharpest, but he managed to shut the Giants out for seven innings. Ventura issued five walks but the Giants could only manage three hits against him. His heater reached triple digits on several occasions and sit in the upper 90s throughout the game.

Veteran pitchers Tim Hudson and Jeremy Guthrie will match up in Game 7. Guthrie worked five innings in Game 3, earning the win despite not striking out a batter. Hudson took the loss in that game, going 5.2 innings and surrendering three runs on four hits with two strikeouts and one walk.

The bullpens will likely factor heavily into this game. In Game 3 the Royals went to their pen after allowing Guthrie to work through the order twice. With ace relievers Kelvim Herrera, Wade Davis and Greg Holland all rested after a blowout victory, expect manager Ned Yost to use a similar tack. That trio can be expected to get at least 12 outs, and possibly more. Brandon Finnegan or Danny Duffy could be used in early relief if Guthrie runs into trouble.

Similarly, the Giants should dip into their pen early. Madison Bumgarner could be available on two days rest. This would normally be his day to throw in between starts, so it’s possible Bruce Bochy could call on him for an inning or two. Petit should be available as well. Late-innings relievers Sergio Romo and Santiago Casilla have been used sparingly throughout the series. It’s all hands on deck, and both managers will be wise not to ask their starting pitchers to work through the opposing lineup more than twice.