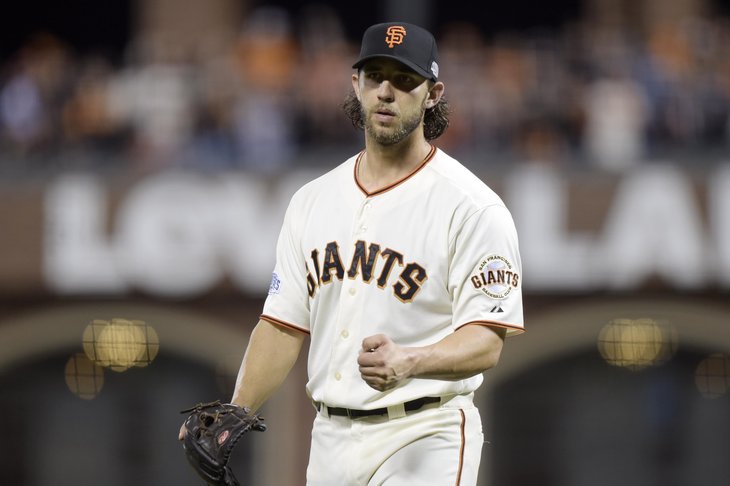 The San Francisco Giants prevailed 5-0 over the Kansas City Royals on Sunday night. Ace Madison Bumgarner twirled a four hit shutout. With the win the Giants take a 3-2 series edge as the competition heads back to Kansas City. For Bumgarner it was his fourth victory of this postseason.

The 25 year-old Bumgarner racked up eight strikeouts without walking a batter. He needed 117 pitches to finish the shutout. While he had thrown a career-high 256 innings going into the game, his fastball showed no signs of fatigue, sitting in the low to mid 90s. 41 of his 52 fastballs went for strikes, and he registered eight swings and misses.

Bumgarner’s cutter and curveball were working as well. Each pitch netted eight whiffs. Of the eight cutters the Royals put in play, just one went for a hit. It’s been a dominant postseason for Bumgarner. He’s thrown 47.2 innings in six starts, and allowed only seven runs. In that time he’s struck out 41 batters and walked only six.

The 25 year-old left-hander has already made 13 postseason appearances. His ERA is a remarkable 2.27, and his strikeout and walk rates are 22.5 percent and 4.6 percent, respectively. In four World Series starts those numbers are even more impressive.

Bumgarner’s first World Series start came in 2010 as the 21 year-old fired eight shutout innings against the Texas Rangers. In 2012 he had another scoreless outing against the Detroit Tigers, helping the Giants to another World Series title. He gave up his first October Classic run in game one against the Royals, though he earned the victory with seven strong innings. Sunday’s shutout lowered his ERA to 0.29. Over 31 innings he’s allowed just a lone run. At the same time, he has 27 strikeouts and just one walk.

The Giants are on the verge of winning their third World Series in five years. After dropping games two and three and falling behind early in game four, they appeared to be on the ropes. However, an explosion of offense against the weaker members of the Royals bullpen and strong relief from Yusmeiro Petit led them to an 11-4 victory. Bumgarner’s dominance put them within one game of taking home the title.

Bumgarner turned 25 not quite three months ago. He’s already made a name for himself with his superb postseason performances. The left-hander is one of the best pitchers in baseball and he’s signed through at least 2017 at an extremely team-friendly rate. The Giants couldn’t be happier with the results they’ve gotten. The Royals couldn’t be happier that they won’t see him start again. But, don’t rule out a possible game seven relief appearance.