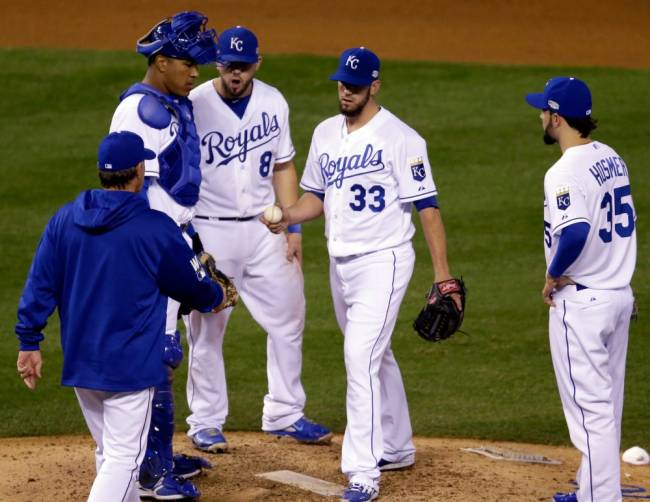 The San Francisco Giants knocked off the Kansas City Royals in game one of the World Series, as Madison Bumgarner turned in another excellent postseason performance. Royals ace James Shields was not up to the task. Nicknamed “Big Game James” Shields has struggled in this postseason. This outing was his worst yet.

In four playoff outings this postseason, Shields has surrendered 15 earned runs in 19 innings. With the exception of a six inning start against the Los Angeles Angels in the ALDS in which he went six innings and allowed just two runs with six strikeouts, he’s pitched poorly.

Against the Giants Shields lasted three-plus innings. Of the 16 hitters he faced, he retired just eight of them, with only one strikeout. 10 of the batters he faced hit line drives. That’s been a theme for Shields, as he’s surrendered 28 hits this postseason, and three home runs. Over 40 percent of the contact he’s allowed has been a line drive.

His strikeout and walk rates of 17.7 percent and 4.4 percent, respectively, aren’t too far off his regular season rates of 19.2 percent and 4.7 percent. However, hitters have clobbered his pitches. Line drive rate isn’t terribly predictive, and for his career Shields has allowed an average rate of line drives, home runs per fly ball and hits per ball in play. Looking at things retrospectively Shields’ performance has been troubling, but it’s unreasonable to expect batters to hammer his pitches in the fashion they have been this October.

Considering that he’s thrown nearly 250 innings this season, it’s fair to ask whether Shields might be suffering from fatigue. Any fatigue isn’t surfacing in the form of reduced velocity, as Shields has held steady in the low 90s. Perhaps the extra wear on his arm is contributing to his command struggles. Or, it might be nothing more than the usual variation that occurs throughout a long season. In October everday ups and downs and magnified.

Earlier in the postseason Shields struggles were easier to glance over. The Royals scored 25 runs in his previous three outings, and the bullpen picked him up with dominant performances. When they score just one run, it’s difficult to overlook Shields struggles. When their ace goes missing, the flaws in the Royals starting rotation are much more evident.

Unless Shields is hiding an injury, he’s still the Royals best starting pitcher. Three poor starts in October shouldn’t change that. It’s easy to draw sweeping conclusions, but it’s more likely that Shields is having a temporary slump, and not an indication that he’s lost his ability to pitch. In the event of a game five, you can be sure Ned Yost will trot him out there. The Royals just have to hope that his command resurfaces.