Derek Jeter’s Impact on a Generation 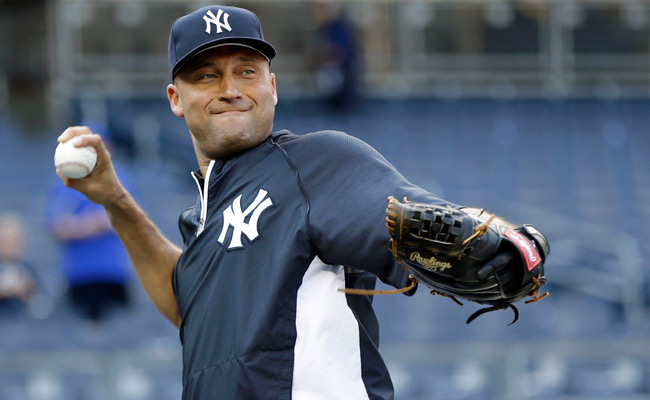 Being born in New York and growing up in NJ, I never really had a choice to root for any team except the Yankees. My family has actively been attending games at Yankee Stadium for close to 80 years and I’ve followed Baseball since the very end of 1993, when my dad started watching games with me when I was a six-year-old.

It wasn’t until 1995 where a few things stuck out to me. I remember Don Mattingly being the first player I actively rooted for. I remember the first ever wild card race with the Yankees beating the Blue  Jays to clinch a spot and I remember the extent of the ALDS heartbreaking loss. Everyone was excited the Yankees made the playoffs, but everything before 1996 culminated with my Dad explaining to me the season doesn’t continue because Ken Griffey Jr. scored after I had gone to sleep.

In Spring of 1995, my family went on vacation to visit my Grandmother in Florida and we traveled to Ft. Lauderdale as a side trip to see the Yankees lose to the Mets in Spring Training. After the game I went to an area for autographs and was spurned by Tate Seefried. Upset, I approached a young looking player and asked for his instead. The man happily signed it and it wasn’t until we looked in a player’s guide we realized his name was Derek Jeter.

And it would only intensity the following season.

Later that year I had attended my first real game in person. The Yankees beat the Orioles 3-0. It was August 7th, 1995. Someone named Mike Mussina, pitched for Baltimore and someone named Tony Fernandez was playing shortstop and went one for three with a run scored. This was the start of my engaged fan timeline.

What I remember most about Derek Jeter’s early years was he was a rebirth to the franchise. New York obviously had other guys like Bernie Williams, Andy Pettitte and Jorge Posada who would emerge onto the scene but Jeter was a shortstop and was somehow more special. He replaced Tony Fernandez, who’s time was so quickly running short in New York, I vividly remember a fan next to me asking  out loud if Tony’s brother was in the stands because a fan had dropped a foul ball.

Naturally, I went to two more games in 1996. The first was May 14th, 1996 when Dwight Gooden threw a no-hitter cementing my status as a fan for life. The second was September 21st when that young shortstop I had forgotten about from the previous spring collected his first ever walk-off hit. The Yankees beat the Red Sox that day, 12-11 after trailing 11-7 and 7-1 earlier. Jeter was officially my favorite player.

He was our source of comfort throughout that season en route to the first championship I ever saw. Throughout the 90’s was somewhat of a Fairy tale for Yankees’ fans. It was the part of a movie where the action is great and the conflict hasn’t happened yet. Jeter emerged as a top player in the league and the Yankees became a dynasty.

As Jeter’s career grew, I grew with it. In eighth grade, I sat with my family, same seat every night, eating out of the same dish just in case, while Jeter hit his infamous World Series home run against the Mets. The Subway Series was serious business in central Jersey and I was glad I could continue attending middle school once it was over.

In 2001 I was a full-fledged teenager and still remember being in the basement of one of my crush’s and watching “The Flip” as if it was in slow  motion. When the ball was hit into the corner I knew the Yankees had no shot at keeping the game from being tied. Mussina started that game for New York and it was the best playoff game he ever pitched.

As that play developed I quickly thought in terms of being a first baseman, as it was the last season I played the sport myself. It should have been cut off, it should have been up the line, Jeremy Giambi should have slid. That play should have been anyting except what it was, which was a shortstop running like he was superimposed onto the screen, grabbing a bouncing baseball on the run, contorting his arms into a perfect flipping motion and executing what had to have been a work of perfection in order to get the job done.

I was silent and so was everybody else when that play happened. We simply didn’t know what to make of what had just happened.

After Jeter became “Mr. November”, my trips to the stadium started to become less and less frequent. We lost our connection to tickets and I was busy with school most of the time. I returned to the stadium, June 30th, 2004, to see the game where David Ortiz had a line drive go through his glove. The Yankees won that game, 4-2. The next day, Jeter dove head first into the stands.

The next season I saw the Yankees beat the Cubs on June 17th, 2005, a birthday gift to me.  The next day, Jeter hit his first and only Grand Slam, an early birthday gift for himself, as he celebrates his two days before I do.

Fast forward to 2009 and I was graduating from college. My dream was to see the Yankees win a World Series while I could celebrate on a campus in Connecticut. Instead, the Red Sox won in 2007 and the Yankees won mere months after I graduated. At the time, that championship felt like a coming of age. I was spoiled and too young to realize it when I was a little kid. I thought championships were something that happened when you rooted for the Yankees.

I imagine Jeter felt something similarly and when New York won in 2009, it was a relief. It was my “adult” championship and I appreciated it differently, including funding my own way to see the Yankees clinch Jeter’s final pennant up close when I watched the Yankees finish off the Angels in six games in person. It was the second loudest I ever heard the new stadium.

In 2011, I splurged for a partial season ticket package. I was working full-time and living in Stamford, a mere train ride away from the stadium. The Yankees won most of the games I attended but as it headed towards the second half of the season attending the games became more and more difficult and the weather hotter and hotter.

Jeter was hurt for part of the year and creeping in on 3,000 hits. One of the games on my season ticket package was against the Rays in mid-July, violating my policy of trying to avoid July games at all costs. Naturally, after  a rain out earlier in the week, I realized there was an outside chance Jeter would have a chance at his big hit that day. After no hits the night before, Jeter was at 2,998 and I knew I had to attend at all costs.

I have seen a no-hitter, a clinched pennant, walk-off hits, Yankees-Red Sox battles and much more in person. I have never experienced anything like I did that day. Jeter’s first hit made it feel like the stands might collapse. His second hit, a home run, and I thought the whole stadium might explode. It was pure joy with the swing of a bat. It was years of being a Yankees fan in the Jeter generation redeemed in a flash.

I would move to Florida before the end of the year, coming back once a season to watch the Yankees. When Jeter announced his retirement in Spring Training, I knew I couldn’t make a trip this season after switching jobs, supplanting myself in the middle of the “wedding circuit” and simply not having the time to do it.

So I said goodbye to Derek Jeter’s career and my childhood as a 27-year-old at Tropicana Field. Jeter reached base and the Yankees came back to win again. Many of us loudly saluted and quietly nodded in understanding as the 40-year-old walked off the field. Sitting in my home with a sleeping girlfriend for Jeter’s final home game I couldn’t help but reflect. I “met” him when I was eight-years-old, and it seemed like every time I witnessed something special, he was somehow involved.

You do not often see an athlete play for 20 years in the same market. You don’t often see someone sustain greatness for most of your life and rack up championships in the process.

For anyone under the age of 30, Derek Jeter is really all we know as Yankees’ fans. He is a timeline for our lives.

Truth be told as soon as Adam Jones homered in the ninth inning I knew how this had to play out. The frightening part is it actually happened. The Orioles, the team I first saw as an opponent, tied it with two outs in the ninth inning. Jeter responded by doing what I saw him do for the first time in his career, hitting a walk off single in his final at-bat at the stadium.

And there it was again.

A silent nod to the end of an era.