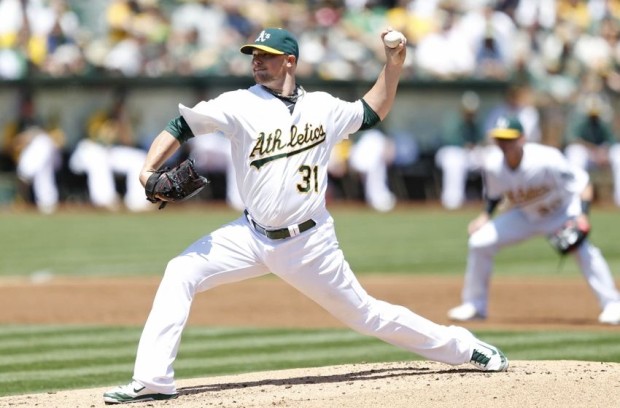 Jon Lester couldn’t have asked for a better year heading into free agency. The 30 year-old workhorse enjoyed a phenomenal 2013 postseason, as he helped lead the Boston Red Sox to a World Series title. Despite Lester expressing his desire to stay in Boston long-term, the Red Sox were not able to come to terms with the left-hander on a contract extension. Thanks to his performance this season, he’ll earn far more in free agency.

In 21 starts with the Red Sox, Lester posted a shiny 2.52 ERA, which was almost three-quarters of a run lower than his previous best mark, set in 2008. His strikeout rate jumped to a gaudy 25.7 percent, and he trimmed his walk rate to a stingy 5.5 percent, easily the lowest rate of his career. However, the Red Sox suffered through extended slumps from several players and poor performances from young players Xander Bogaerts and Jackie Bradley, which put them well out of playoff contention.

As a consequence, the Sox sent Lester to the Oakland Athletics at the July 31 trade deadline in a deal that saw them receive slugger Yoenis Cespedes. Since joining the A’s, Lester has quickly established himself as the ace of the staff. In five starts with Oakland, he has a 2.60 ERA, with strikeout and walk rates of 23.5 percent and 5.1 percent, respectively.

Overall Lester has produced career-best marks in several categories. Felix Hernandez is the front-runner for the American League CY Young award, but Lester has put himself within striking distance. Among AL pitchers he ranks third in fWAR with 5.5, behind Hernandez at 6.2 and Cleveland Indians ace Corey Kluber, who has accumulated 5.8 fWAR. His adjusted ERA is the fourth in the AL.

With six starts remaining, there’s an opportunity for Lester to surpass Hernandez and Kluber or the other candidates who could throw their names in the mix such as Chris Sale. Only once in history has the CY Young award been handed out to a pitcher that was traded midseason. That distinction belongs to Rick Sutcliffe, who began the year with the Indians before being swapped to the Chicago Cubs. C.C. Sabathia finished 5th in the NL CY Young voting in 2008 despite making only 17 starts for the Milwaukee Brewers.

Unlike either of those players, Lester has spent the entire season in the American League. A’s General Manager Billy Beane is pulling out all the stops in an attempt to get the A’s to the World Series for the first time during his tenure. Lester has certainly lived up to his billing after the A’s dealt away their top outfielder to acquire him. He’s set to receive a huge payday this offseason. The Red Sox may very well regret their inability to sign him to an extension after he led them to the World Series.