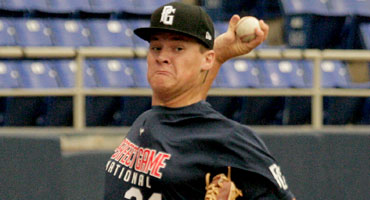 The Miami Marlins shave reached an agreement with Tyler Kolek, the second overall pick of the 2014 draft, and will officially introduce their newest prospect later today.The deal is worth a reported $6 million below the approximate $6.822MM slot price for the No. 2 overall selection.

Kolek is a big-bodied right-hander, 6-foot-5, 255-pound,  who can touch triple digits and boasts a plus curve.

“He’s got plenty of arm strength without trying to force anything,” Marlins vice president of scouting Stan Meek said, after the Marlins drafted him. “That’s what we really like, a good fastball that’s not being forced…The command of the fastball is pretty good for a high school kid. We hope he’d move up rather quickly, but he kind of puts that on himself.”

The 18-year-old Kolek was to attend the Marlins’ game Monday night against the Chicago Cubs. The Marlins have signed 19 of their 42 draft picks, including their first five.