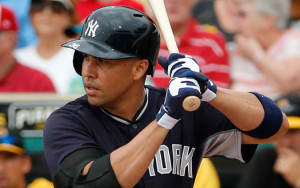 The New York Yankees spent a lot of money this winter on covering up a lot of flaws for a team who overachieved to win 85 games. And if you were to look back at the 2013 Opening Day lineup and compare it to today, you would see just how far the team has come.

Only Brett Gardner was in the lineup this season and last season during the first game of the season and four hitters from last season aren’t even in the major leagues anymore. An additional two are now backups on the Yankees’ bench.

Suffice it to say the Yankees have come a long way in a year and made huge investments to get there. Still, early on the Astros showed good starting pitching (even if it’s not from a source you expect) and the Yankees struggle to score runs unless it’s via the long ball. This aspect of the team is likely to change with a larger sample size.

Jacoby Ellsbury and Gardner offer unprecedented speed in recent Bronx memory and Ichiro Suzuki and Francisco Cervelli add even more of it off the bench. Carlos Beltran and Brian McCann represent tough outs and thrive at getting runs across the plate, an aspect of the lineup the Yankees struggled to find last season.

More of the question marks are in the rotation, which will need to identify its leader and natural order of things. One can make an argument in an alternate but potentially realistic universe, the Yankees’ rotation might end up upside down come August. Michael Pineda had an amazing spring training and comes to the majors with a three pitch arsenal, something he has never had before, even with his previous big league success. Masahiro Tanaka seemed to raise already high expectations with the way he conducted himself in Tampa during the month of March.

It’s conceivable by the end of the season Pineda and Tanaka can represent the present and the future, Sabathia will remain an afterthought and Hiroki Kuroda may be pitching his final major league games. Still, Sabathia is now a pitcher who must always locate. Gone are the days of sneaking a 96 MPH fastball past a hitter. Sabathia must now place an 89 MPH heater and compliment it with a healthy dose of changeups to keep hitter’s off balance. After a great spring, that could take adjustment.

Kuroda must show his stretch run last year was a product of stamina, not strength and Pineda and Tanaka still have to prove themselves against major league lineups. Ivan Nova has to demonstrate he’s the pitcher with rising K/9 rates and shrinking BB/9 ratios, not the pitcher prone to big ERA’s and early exits.

While the bullpen should surprise many with no-names who have big arms and the offense should right itself with a potentially lethal balance, the Yankees’ rotation may continue to be the biggest flaw until it finds its groove. Or else the Astros just proved how fast things can go wrong. It’s a start the Yankees cannot afford.