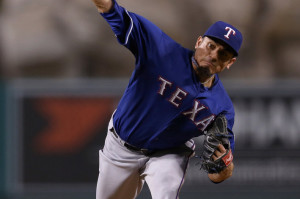 The Milwaukee Brewers made a statement this winter and they did it much in the same way as last winter. One of the last Free Agent pitchers to sign before spring training last season was Kyle Lohse, and now he will be joined by the newest member of the rotation, Matt Garza.

Garza was signed to a four year, $52 million dollar deal just one day after the top starter in Free Agency, Masahiro Tanaka, signed for over $100 million more with the New York Yankees.

On the surface, this looks like a great deal for the Brewers as they picked up a solid starter with a good track record at an affordable price in a winter filled with shockingly large contracts and long commitments. The 30-year-old right handed pitcher has run into injury problems his last couple of seasons, which may have helped lower his asking price.

After four consecutive years of 30+ starts, Garza made just 18 in 2012 and followed it up with 24 in 2013, spending the better part of three years in the NL before joining Texas to finish out last season. With experience on the Rays, Cubs and Rangers, Garza should not have to adjust much in Milwaukee having already pitched in batter’s parks and against tougher lineups.

Garza finished last season throwing 155.1 innings with a 1.23 WHIP and 136 strikeouts to compliment a 3.82 ERA between 11 starts in Chicago and 13 in Texas, finishing the season healthy. He will join Lohse, Yovani Gallardo, Wily Peralta and Marco Estrada in what should be a young but improved rotation for the Brewers.

Milwaukee finished in fourth place with a 74-88 record in the NL Central last season, surrendering the sixth most runs in the NL, due in large part to a thin rotation and awful bullpen.

Nicolet Bankshares vs. Banc of California Head to Head Review