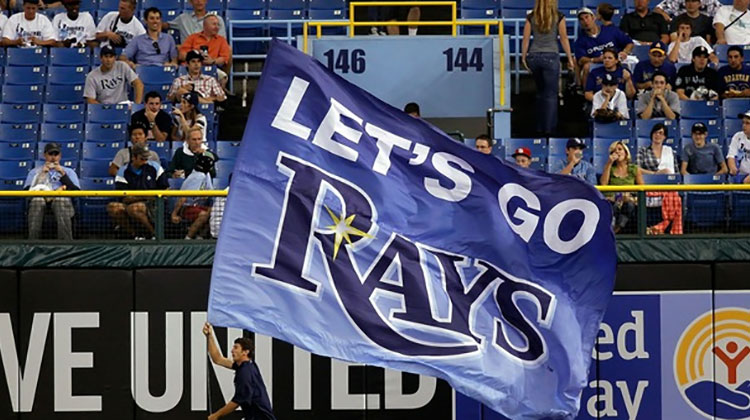 For most Tampa Bay Rays fans going to Tropicana Field to enjoy a game is easy. For avid Rays fan Randi Oomens, better known as Ro on Twitter, not so much. Twitter can be a great source of information, some good, some not so good, but every once in a while something special comes across your timeline. Such was the case when I happened on to a tweet about Ro, who was trying to figure out how to get to Opening Day at Tropicana Field. Let me explain why.

Ro lives in Arizona, not exactly a hop, skip and a jump to The Trop. To complicate matters Ro is blind and lives on a modest fixed income making a dream trip to see her Rays virtually impossible. That was the case until recently when her Twitter family stepped up to the plate.

Ro went completely blind in 2008 due to multiple sclerosis. She credits Rays third baseman Evan Longoria’s walk up music as the inspiration that got her into baseball. By her own admission she wasn’t a fan until then in 2009. She became a dedicated listener of every single Rays radio broadcast since.

In 2013 she finally was able to attend Rays games in Colorado when the team played the Rockies. She enjoyed two mores game in Arizona last June when the Rays played the Diamondbacks, but a trip to Tropicana Field remained a dream.

Courtesy of David Price, she was allowed access to the on-field pre-game activities  in Arizona and met Rays Radio announcers Dave Wills and Andy Freed, who she listens to on 620, Tampa Bay Times beat writer Marc Topkin along with Sarah Maddon, Joe Maddon’s daughter, all of whom she’s become friendly with thanks to Twitter.

Wills recalls, “I first got to know Ro a few seasons ago when I joined twitter…  We would engage in great conversations during the games, it was like she was sitting between me and Andy. When I found out more about how Ro became a Rays fan, it only enhanced our friendship. During such a traumatic time in her life, she turned to the Rays and the radio to help her through it. I am glad we have become friends.”

During an online chat in mid December with fellow Rays fan, with the urging of @MandaGator she booked tickets to make her dream a reality.  @MandaGator encouraged by fellow Rays fan @prtwain took it upon herself to begin the fundraising. Her trip was estimated to cost around $2000.00 and soon the hashtag #RoToTrop began popping up on Twitter. A Paypal account was set up for donations in hopes of making  her dream trip a reality.

“Over the years, various Rays fans in Florida have done what they can to help her feel the fold of the family arms reach around her by sending her shirts, bobbles & balls and having players call her during the MetroPCS promo @FanFest and she has also spoken to Matt Joyce.”,  @MandaGator shared with Baseball News Source.

“Her itinerary includes arriving March 29th with a prescribed rest day.  The following day she and her guide dog Jayden will enjoy the Gulf of Mexico beaches. The next three days the focus is on Tropicana Field and the Rays. Twitter friends will be able meet Ro in the new outfield area pre-game. And what trip to the Trop would be complete without a visit to Ferg’s Sports Bar and Grill . As of this morning donations totaled $545 which is amazing, really amazing.”

As for Ro, “I am over the moon and can’t wait to make this dream come true. I can’t wait to stand inside the very building I have come to love and hear all the sounds in person that I have heard on the radio broadcasts. It’s going to be the experience of a lifetime and I hope the Rays Twitter Family and I can help others achieve this dream in the future.”

If you would like to donate to you can via PayPal at raynaadi (at) gmail.com.