Derek Holland Out until Midseason – Blames Dog For His Injury 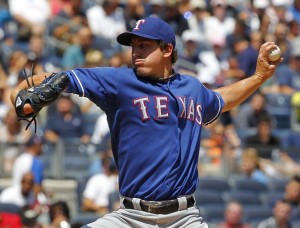 Derek Holland is expected to be out until midseason for the Texas Rangers and he’s blaming his pet dog for his injury. Holland, who has torn cartilage and required arthroscopic surgery on Friday, says he injured himself on his stairs at home when his dog accidentally clipped him.

Coincidentally, Holland’s dog’s name is “Wrigley” named after the home ballpark of the Chicago Cubs, a notoriously “cursed” franchise.

Holland had this to say on the incident: “He was running up the stairs and clipped me,” Holland said Saturday. “I hit my knee on the step, and if it wasn’t for me grabbing the rail, I might have fallen all the way down the stairs and cracked my head open.”

Early speculation included thoughts Holland may have injured himself playing hockey, something the pitcher has long confirmed is an off season tradition. Holland, however, seemed aggravated by those accusations and maintains the league he plays in does not permit contact and he played through his games unharmed.

“I’m getting tired of the assumption that I hurt myself playing hockey,” Holland said. “I played the full game and was fine.”

For the Rangers, it’s a fairly big blow to the team’s first few months of the season. Despite already being  on a rehab regimen, Holland, currently working on range of motion, is still expected to miss a few months even if he hopes to return sooner. With the additions of Shin Soo Choo and Prince Fielder along with a full season from Alex Rios, the Rangers are widely considered a contender and possibly the favorite in the American League. Holland was expected to be the team’s number two starter, right behind Yu Darvish entering his third season.

Nick Tepesch may be first in line to eat up Holland’s innings, but is a considerable question mark comparatively.

“It was just a freak accident, and it stinks. That’s what happened,” Holland said. “For me personally, it’s a big blow. I was very excited to get back with the guys and start the season. I felt like my offseason was great. I had what I thought was a good season last year and wanted to build off it.

The Texas Rangers will be hoping the sentiment will not be the same heading towards mid season, but will likely be fine with minor league depth and a devastating lineup.