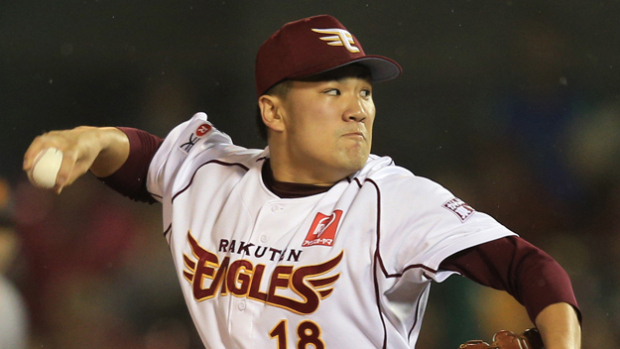 On Christmas Eve, the Rakuten Golden Eagles finally decided to post ace pitcher Masahiro Tanaka. After weeks of negotiations, the MLB and the NPB agreed on a posting system that set a limit of $20 million. Previously there had been no limit to the amount a team could bid for negotiation rights. While the Eagles would have preferred to hang onto Tanaka for another year and post him in 2014 before he hit free agency in 2015, Tanaka’s desire to pitch in the states won out.

Tanaka, who went 24-0 with a 1.27 ERA for the Golden Eagles in 2013, is the biggest pitcher to come out of Japan since Daisuke Matsuzaka in 2006 and Yu Darvish in 2011. Both Matsuzaka and Darvish commanded posting fees upwards of $50 million. Matsuzaka was 26 when he came to the states, Darvish was 25, as is Tanaka.

How does Tanaka compare to Darvish and Matsuzaka?

After the Boston Red Sox won the rights to negotiate with Daisuke Matsuzka, he signed a six-year deal worth $52 million. Before signing with the Red Sox, Matsuzaka had pitched eight seasons with the Seibu Lions. In just over 1400 innings, he had a 2.95 ERA with strikeout and walk rates of 23.5 percent and 8.7 percent, respectively. His high pitch counts in Japan were certainly a concern as was his smaller frame.

Looking back perhaps the Red Sox should have been more wary. However, with a repertoire that featured a fastball that could touch 96, a plus slider and cutter and the occasional curve or gyroball, their eagerness was certainly understandable.

Things went downhill from there, as Matsuzaka would make just 62 starts from 2009-13, posting a 5.37 ERA and 4.62 FIP. Injuries took their toll on his fastall, which was sitting in the upper 80’s in the seven starts he made with the New York Mets in 2013. Overall, his performance did not justify the $110 million investment the Red Sox made.

Yu Darvish signed a six-year contract worth $60 million after the Texas Rangers outbid their competitors to win his negotiation rights. Right now, that deal is looking like a steal as Darvish is one of the best pitchers in the AL, if not the best. Prior to joining the Rangers, Darvish spent seven seasons pitching for the Nippon Ham Fighters.

In slightly more than 1250 innings, Darvish had a sparkling 1.99 ERA with strikeout and walk rates of 25.1 percent and 6.7 percent. He struck out 31.2 percent of hitters in his last season with the Ham Fighters, while walking only 4.1 percent.

In his first two seasons with Texas, Darvish has used his six pitch mix to strike out an MLB best 30.1 percent of hitters. His fastball gets up to 97, and he relies heavily on a devastating slider while also featuring a cutter, slow curve, changeup and splitter, all strong pitches. At 6’5, and 225 pounds, he has classic size. There’s significant mileage on his arm, but he’s been exceptionally durable up to this point.

Still, even if he’s been overhyped, he’s a very talented pitcher. Scouts have referred to his splitter as one of the best in baseball, and that alone should give him an advantage. In the past two seasons, only five pitchers have thrown at least 15 percent splitters. They’ve combined to produce 25.7 fWAR while posting a 3.74 ERA and striking out 20.9 percent of hitters and walking just 6.7 percent. Of course there are better and worse splitter pitchers, but it’s a valuable pitch that is effective against right and lefthanded hitters.

One of those splitter throwers, Hiroki Kuroda, is a good comp for Tanaka. The comparison goes beyond sharing a country of origin. Both are listed at 6’2 and 205 pounds, they each possess excellent command, a fastball with plenty of movement that sits in the low 90’s, and a good splitter-slider mix.

Since coming to the U.S. at 33, Kuroda has been one of the most consistent pitchers in the big leagues, never posting an ERA- above 93. At 25, Tanaka is eight years younger, and has a good track record of durability.

Tanaka doesn’t have the raw stuff that Darvish does, but his repertoire should carry over very well. Like Darvish and Matsuzaka, he’s thrown a lot of pitches in Japan, but he has a better injury history than Dice-K. Certainly he’s a better option than the other free-agent pitchers available, who are both older and less accomplished.

With the lower posting fee, expect him to get a much bigger contract than either Darvish or Matsuzaka. Six years and $110 million looks like a lot, but that might be a conservative estimate.

Expect almost every team to be in on the bidding, but the Texas Rangers, Los Angeles Dodgers, New York Yankees, Chicago Cubs, and Seattle Mariners are shaping up to the be the prime players.

Six Teams With the Best Chances to Land Masahiro Tanaka

The New Germany Fund, Inc. Short Interest Down 18.9% in May