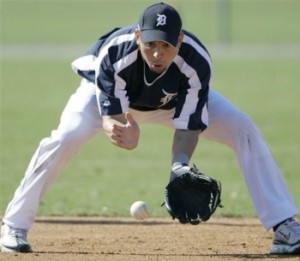 The New York Yankees are fresh off only its second missed postseason in 19 years and much like in the winter headed into 2005, looking to play catch up with its arch rival Red Sox, who will enter the postseason as defending champions. They have already done great work to significantly upgrade the team.

Bringing back Hiroki Kuroda insures at least three viable starters in the rotation and a surplus of arms to make a fifth starter. They still need one more front-end starter to enter an elite category.

On offense, the Yankees have undergone a full makeover (much like they did with the rotation during the aforementioned winter, when it brought Jaret Wright, Carl Pavano and Randy Johnson to town).

With two new starting outfielders, the main focus on offense will be in the infield  and the biggest shoes to fill are still at second base with Cano’s departure. It’s been widely speculated the Yankees are enamored with Omar Infante, but he’s asking for at least four years and $32 million. Infante is a lifetime .279/.319 hitter and doesn’t offer much else besides defense.

For a 32-year-old, the Yankees aren’t interested in a three year deal for a guy looking to capitalize on a 118 game season. And while a team like the Royals seem more likely to give in to Infante’s demands, there aren’t many other great choices for the position.

That means it’s very likely Kelly Johnson is not a placeholder and will be there Opening Day alongside Teixeira. It’s less likely Eduardo Nunez is your starting third baseman. Instead of Infante, the Yankees will likely end up looking at: Juan Uribe, Eric Chavez, Michael Young, Placido Polanco and Justin Turner. It’s far more likely the Yankees hold onto Brett Gardner as a utility outfielder who plays left field against right-handed hitters while Alfonso Soriano primarily DH’s and also in the event Beltran or Ellsbury get hurt.

If the Yankees did move Gardner, it will likely be because they were blown away with a starting pitcher offer, but these things usually have a way of working themselves out.

It’s doubtful New York goes with Young or Turner since it’s unclear they can play third base every day and Placido Polanco is not an upgrade over Nunez. That leaves Uribe, who sports an excellent postseason career, or Chavez, who has been in New York before and offers solid defense and a solid bat. Chavez is never healthy enough to be relied on a full season and lives close to where he plays.

Smart money is on Uribe, who has playoff pedigree, a .273/.331 line with some pop last season and can probably be had on a two year deal. The Yankees have not been connected to him this postseason but they also are unlikely to go hard after anyone until the A-Rod situation figures itself out.

The Yankees may be looking to fill a void at second base, but don’t be surprised if they compensate at third base instead by looking at someone like Uribe, and not Infante.