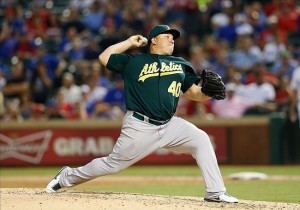 The New York Mets have reached an agreement with Bartolo Colon on a two-year deal worth $20 million  according to Ken Rosenthal of Fox Sports. Colon was drawing interest from several teams including the Minnesota Twins, Texas Rangers, and Baltimore Orioles.

The Cleveland Indians also had interest in reuniting with the veteran right-hander but were unwilling to go beyond a one-year deal.  Colon, 40, pitched to a 2.65 ERA over 30 starts last year with the Oakland Athletics.

He was suspended 50 games for failing a performance-enhancing drug test in the late 2012 season. Colon will join holdovers Jonathan Niese, Dillon Gee and Zack Wheeler in the Mets’ rotation.

The A’s replaced Colon’s spot in the rotation signing Scott Kazmir to a two-year deal earlier this off-season.