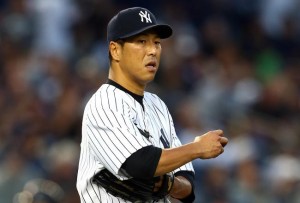 The New York Yankees have reached an agreement with right-hander Hiroki Kuroda on a one-year deal worth $16 million according to Jon Heyman of CBS Sports. While Kuroda could have signed with a number of teams it really got down to either returning to the Yankees or returning to Japan.

Yankees general manager Brian Cashman has said all along that he wanted Kuroda to come back.

“I believe he wants to come back,” Cashman said. “And we’re trying to make that happen.”

Kuroda will likely be slotted as the number two starter behind CC Sabathia in 2014 barring a major  pitching acquisition by New York.