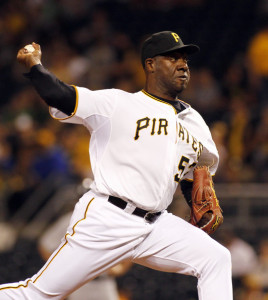 The Texas Rangers added some veteran presence to its deep farm system today, signing relievers, Jose Contreras and Nate Adcock, and outfielder, Bryan Peterson, to minor league deals. The most notable name of the trio is Conteras’, who had a successful 2010 relief campaign with the Phillies when he pitched to 3.34 ERA in 56.2 innings.

Now 42-years-old, Contreras is nothing more than a minor league reclamation project, most recently spotted floating between farm systems for Pittsburgh and Boston and posting a respectable 3.00 ERA in 33 AAA innings.

The Cuban born, former starter missed a chunk of last season recovering from a 2012 shoulder surgery and yielded five unimpressive major league innings with the Pirates.

Adcock, significantly younger at 25-years-old, also enjoyed glory days prior to last season in 2012 with the Royals before coughing up a 6.67 ERA with awful peripherals for the Diamondbacks and Royals’ AAA systems. Both relievers will receive an invitation to spring training but neither are guaranteed any spot on the major league rosters by any  means.

Peterson, experienced in all three outfield positions, is 27-years-old and has sported a .220/.303/.305 slash line in his career. In 539 career major league at bats with the Marlins, the utility outfielder has also added 15 stolen bases.

Last season, Peterson was a strong representative of organizational depth, providing a positive AAA campaign for Miami when he hit .275/.363/.407 in 579 at bats. Texas has been busy this offseason so far, replacing Ian Kinsler with Prince Fielder and trying to find a replacement for outfielder, Nelson Cruz.

All three players would presumably be fighting for a spot in the organization with their spring training invites as Texas looks for bullpen depth after newly departed Joe Nathan vacated the closer role. While none of these players figures to ever start for the team, they can see opportunities in middle relief, providing injury relief or in fourth or fifth outfielder roles respectively.