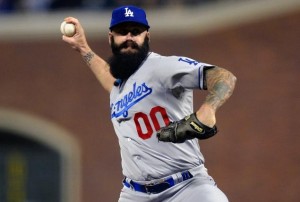 When the Los Angeles Dodgers signed Brian Wilson the day before the trade deadline in 2013, it was mostly to take a flyer on the once dominant closer. Wilson delivered better than anticipated following a Tommy John surgery in April of 2012, hurling just one earned run and a 21-to-6 K to BB ratio to compliment his 19.2 innings in both the regular season and playoffs.

For Wilson, it was a return to the top of the reliever game despite pitching in the role of setup man, a role he will likely reprise behind Kenley Jansen again in 2014.

From a financial standpoint, the deal still makes sense, however, since Jansen will project just $4.8 million through arbitration next season. Wilson and his trademarked beard will be paid substantially more.

The baseline of his deal is one year at $10 million dollars, but Wilson’s contract will include an additional year in the form of a player option, bringing the guaranteed money to $19 million dollars and further including incentives in both seasons, both adding up to $700 thousand.

At two years and $20.4 million the deal will be worth it if Wilson is a premiere setup man or eventual closer should Jansen struggle and for a team in win now and deep pockets it most certainly makes sense for the Dodgers.

The deal makes equal sense for Wilson, the former Giants’ icon, now pitching for both the arch rival and the other part of California.

Should Wilson have a repeat full season in 2014, he could enter next year’s offseason as an elite relief arm. If Wilson struggles, he’s protected by a second guaranteed year completely on his terms. As an added bonus, Wilson provides playoff experience and World Series pedigree to match his eccentric personality and appearance.